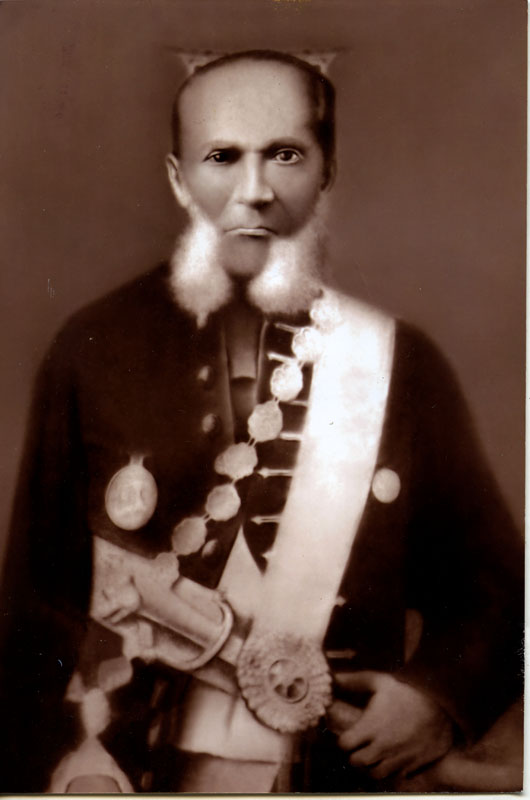 I would make faces at him when no one was looking, quite sure he couldn’t come down to punish me, although I felt his piercing eyes follow my every escapade. He had a long impressive name — Mudaliyar Wijesuriya Gunawardene Mahawaduge Andris Perera Abhaya Karunaratne Dissanayake — and was my scowling grumpy looking maternal Great-great-grandfather (GGGF). He held a prestigious position as a Mudaliyar in the Colonial administrative system in the nineteenth century in Panadura.

The legend and the oral history was mostly on his dream of a location of “nidhanaya” a treasure trove and the gilded gold Buddha statue and other treasures. The loot he found is embedded in the Chaitya of the Welipitiya Abhaya Karunaratne Mudalindaramaya Temple in Panadura, that he built with his wife Waduge Appolonia Fernando ( Note women still hung on to their maiden names).

The Chaitiya then and for a long time was the the largest one between the Kelaniya Temple and Tissamaharama in the deep South.

The U.S. Embassy in Sri Lanka in 1998, brought out a special edition of the “Images of Sri Lanka Through American Eyes”  to mark the 50th Anniversary of the establishment of full diplomatic relations between the United States and Sri Lanka and Sri Lanka’s 50th anniversary of independence.  I was working at the embassy then but didn’t discover till much later that this book contained a most colourful descriptions of GGGF when he played host to  Colonel Henry Steel Olcott — an American military officer, journalist, lawyer and the co-founder and first President of the Theosophical Society.

Olcott’s interest in Buddhism and its struggle against Christianity in Ceylon was roused after he read his friend J.M Peebles booklet on the famed oral debate between the Most Venerable Migettuwatte Gunananda Thera and Rev. David de Silva in August 1873.  Olcott landed in Galle on 17 May 1880, with a delegation from the Bombay Theosophical Society and with Helena Petrovna Blavatsky, the co-founder of the Theosophical Society in New York.. Olcott and Blavatsky occupies a special affectionate niche in the family not only for the contributions they made to the renascent Buddhist movement but also for the vivid description of the meeting with Andris Perera.

Olcott in his dairy says:

“We were lodged in a new pansala adjoining a Vihâra, which had just been erected by a picturesque-looking old man, named Andris Perera, at his own cost. He was tall, thin, dark, had a spacious forehead, wore his hair brushed back and twisted into a long switch, which was put up like a woman’s hair, with an immense and costly tortoise-shell comb; and a circular comb—a Sinhalese fashion—arched over his fine head. He wore the country dhoti, and a single-breasted, last-century coat of blue cloth, with long skirts, turnover cuffs, twenty large gold buttons down one side of the front and as many loops and lacings of gold lace opposite them, and the same ornamentation on the collar and cuffs. A gold-laced scarlet baldric, passed over one shoulder and under the opposite arm, supported a short sword with a gold scabbard; a huge gold medallion-plaque, as large as a dessert plate, was suspended diagonally in the contrary direction by a golden chain; a heavy and richly embossed gold girdle was buckled about him. His feet were bare and he wore leather sandals! The figure was so striking, so unlike any other we saw, that I noted the above details in my Diary. He had advanced some little distance from the house to receive us, and behind him stood his six tall, striking-looking sons and three handsome daughters. The group struck us as being very picturesque. I bethought me of Torquil of the Oak and his stalwart sons, though I cannot say that I thought the Sinhalese family would have withstood the Gow Chrom as well as the champions of the Clean Quhele. Without delay, the old “Mudaliyar” (the title of a Headman’s office) led the way to a large permanent preaching-shed, and I addressed some 4,000 people.”

Olcott had developed an interest in spiritual phenomenaand had met Blavatsky, the daughter of Colonel Hahn of the Russian Horse Artillery, and widow of Colonel Balvatsky, Governor of Erivan in Armenia. Olcott & Blavatsky together formed the Theosophical Society in New York in September 1875.

“The party lunched at the house of Mr. Arunachalam, the Justice of Kalatura, a Cambridge graduate and a gentleman of high breeding and culture. The unfinished railway (Colombo and Galle Railway) is here reached, and the Theosophists were conveyed by train to Panadure, where the station and platform were found tastefully decorated with cocoanuts, flowers, and foliage, and both sides of the main street and the approach to the bungalow set apart for their use lined with strips of palm-leaves suspended from continuous cords.

Their host at this town was the venerable and wealthy Mudeliar Andris Perera, a stately old man with a large family of stalwart sons and daughters. He had not allowed any committee to assist, but had supplied every thing — decoration, house, furniture, food, and servants — at his personal cost. As the guests neared the bungalow, they saw a triumphal arch. erected at the gate of the compound, and their host approaching them in the full uniform of his rank of Madeliar. A large shell comb — the comb is worn by all Cingalese gentlemen — was in his iron-gray hair; his dress comprised a blue frock-coat with gold frogs and jewelled buttons; the national skirt, or dhoti, worn as a simple wrapping without folds and confined at the waist by a gold-clasped belt; a satin waist-coat with two rows of large emeralds for buttons; and a magnificent sword with solid gold scabbard and hilt, both studded with gems, suspended from a solid gold baldric elaborately carved. He was attended by two stave-bearers in uniform, and followed by his family and a host of acquaintances. As he marched along in the full sunlight, he certainly presented a very gorgeous appearance. His sword and baldric alone are computed to be worth at least 2,500 Pounds.”

The Tortoise shell combs were worn by gentlemen then, to separate themselves from the labouring classes who carried goods on their heads.

The building of the temple commenced in 1868, in what was a marshy property he and Applonia owned. The recovery of the Gold Statue, the erection etc  makes an interesting story too. He had used a mini army of workers who passed baskets of sea sand from one to the other to fill the land. Next came elephants to stomp on it till firm to make the ground solid for building. Although he at first wanted to build it to be as big as the classic Ruwanweli Seya in Anuradhapura, the work couldn’t progress. After another message in a dream he reduced the circumference and then work progressed. Looks like he was a man who listened to his dreams or knew how to interpret them or better even is the thought that he was a clever strategist who knew how to make himself a powerful man in the community. Although Olcott states he had 6 sons and 3 daughters, its listed in a little booklet on the temple that he had 6 sons and 4 daughters.

We have kept in touch with only the clan of John, the Great grandfather and his wife Annie Caroline Fonseka, who had four daughters:

Panadura clan at Dissanyake Walauwa on my Great-grandmothe Annie Dissanayake’s 75th birthday Re-photographed from a original by Chulie de Silva.

Back Row: Victor husband of Leela; Nissanka, Iranganie & Sepal, no. 2,3 & 4 children of Romiel and Eva; Swarna & Srimathie no 3 & 2 daughters of Rita and Notary; Nanda, Wilmot and Peter sons of Gillian; Bennie My father and Malini, eldest daughter of Rita and Notary.