I went to school and grew up in a very Buddhist enclave in Panadura called “Nalluruwa” and I wondered what the connection was to the Nallur Kandaswamy temple as I wandered in to this famed Hindu Kovil on a cool balmy evening in 2009. The aura of peace and calm surrounding this most revered place of worship for God Skanda was palpable. 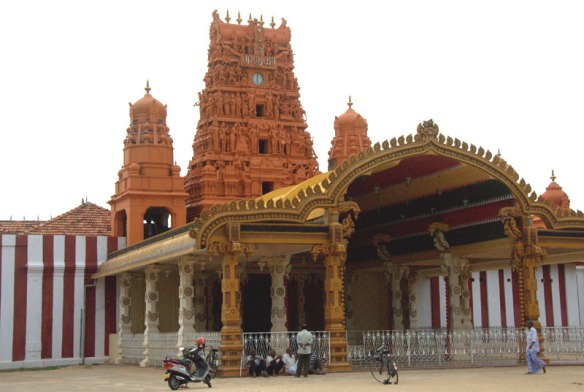 The entrance to the Nallur Kandaswamy Kovil or Nallur Murugan Kovil (Tamil: நல்லூர் கந்தசுவாமி கோவில்). It is one of the most significant Hindu temples and a favourite with devotees. Jaffna, Sri Lanka. 31 Aug 2009. Photo Chulie de Silva.

Skanda is the Hindu God of war and can therefore be compared with Mars, the Roman God of War and tutelary deity of Rome. “The ancient Tamils saw Him as an embodiment of loveliness and beauty, ever young and fragrant. They had worshipped him, for more than five or six millennia and this faith and devotion that they had for Him have been embedded in their collective consciousness,” says Sivanandini Duraiswamy. 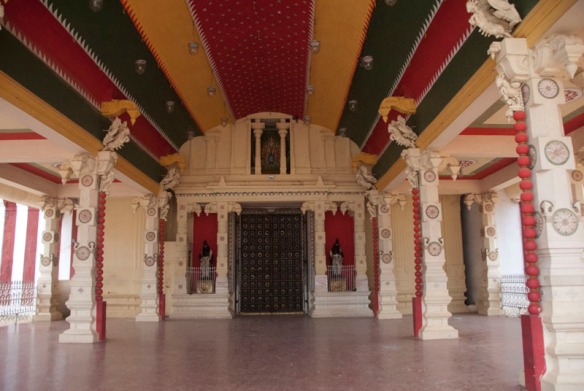 To walk into the temple is to be enveloped in a strange mystic aura.Nallur Kandaswamy Kovil or Nallur Murugan Kovil. Photo Chulie de Silva.

A Tamil colleague explained that the daily temple prayers indicate that the Hindu temple was built in Nallur in 1462 AD (1385 Saka Era) by Bhuvaneka Bahu VI known in Tamil as Senpaka Perumal. 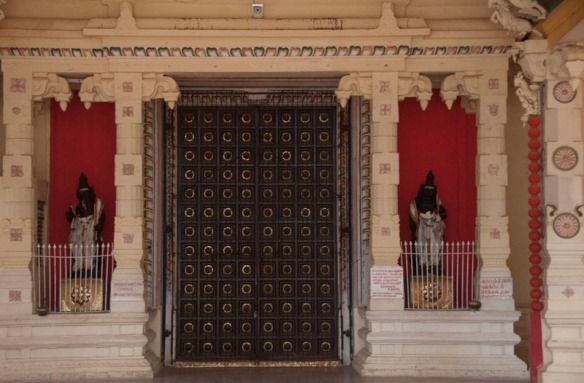 Details of a door to an inner worship chamber at the Nallur Kandaswamy Temple. Photo Chulie de Silva

Nallur was the pre-colonial capital of the Kingdom of Jaffna. The Portuguese destroyed the temple in 1621 AD and the temple was rebuilt during Dutch rule in 1749 AD. 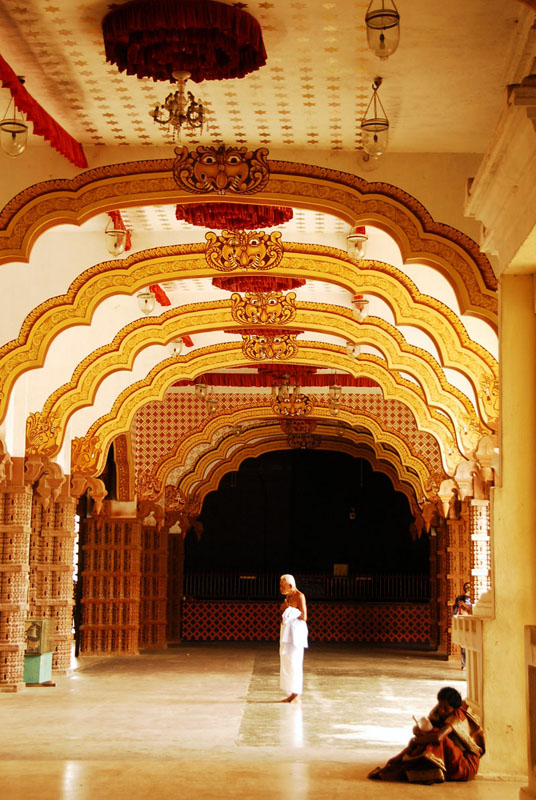 A woman prays quietly and an elderly priest walks past this beautiful chamber with high decorative ceilings leading to a magnificent alter. Photo Chulie de Silva

“The world rejoices and the many adore as the Sun of Glory riseth for the world’s joy,” says Duraiswamy in an article quoting the opening lines of the celebrated Sangam work depicting Lord Murugan as the Supreme One riding across the luminous sky bringing joy to all. 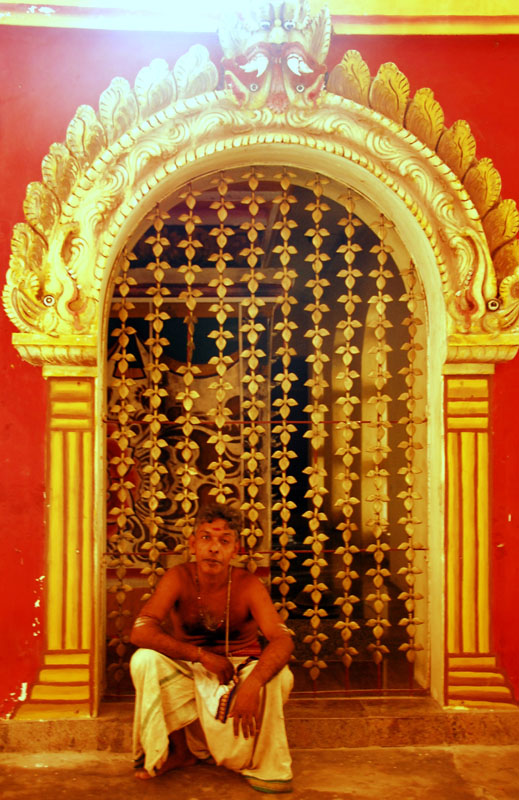 A priest sits outside the entrance to an inner temple. Photo Chulie de Silva

The first clock tower was erected in 1899, and the main hall where the vel or lance of the deity resides was re-furbished using rocks in 1902, says a report on wikipedia. The temple was undergoing renovations at the time I visited. 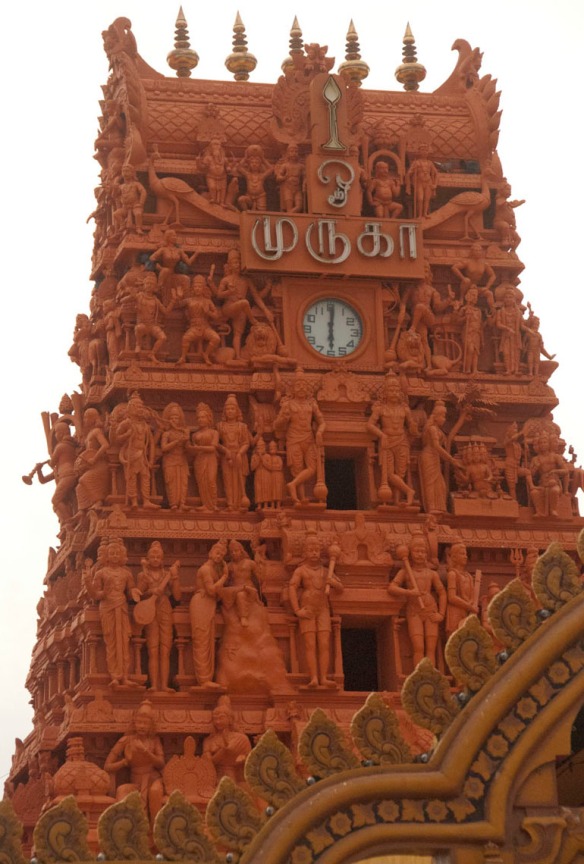 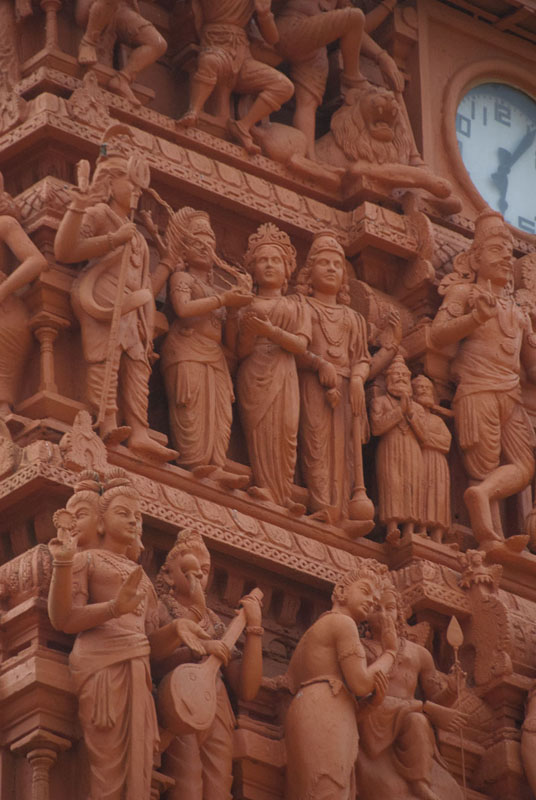 Details of carving on the clock tower at the entrance to the Nallur Kandaswamy Temple. Photo Chulie de Silva. 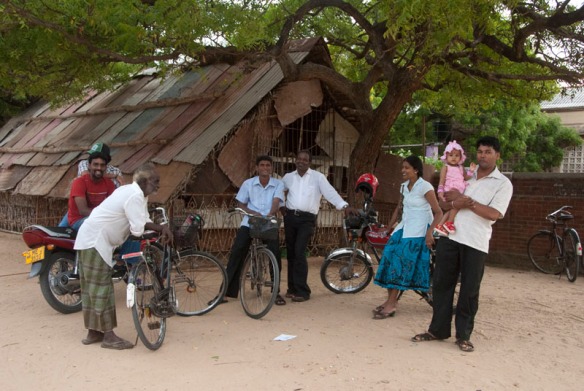 The aura of peace and joy was also with the people I met just outside the temple. Photo Chulie de Silva.

Skanda is also the patron deity of Ruhuna where he is worshipped with fervour by Buddhists and Hindus at the Kataragama Temple. He is considered as a guardian deity of Sri Lanka. The Kataragama temple was founded in what was then the deep Southern jungles of Sri Lanka. It is a pilgrimage undertaken by many Buddhists as well as Hindus – a hazardous journey on bullock carts in a land frequented by wild elephants  and leopards in days gone by, the journey is now made easier by motorable roads. The veneration of Skanda is a common feature for the North and  the South of Lanka.

Skanda is also housed in a shrine adjacent to the Temple of the Tooth in Kandy. Interestingly, the temple festivals in Kataragama, the Kandy Perahera and the Nallur Temple festival all take place around the same time says my learned Tamil friend.  The Kandy Perahera and the Nallur festival start at the conclusion of the Kataragama water cutting ceremony in the month of Esala!