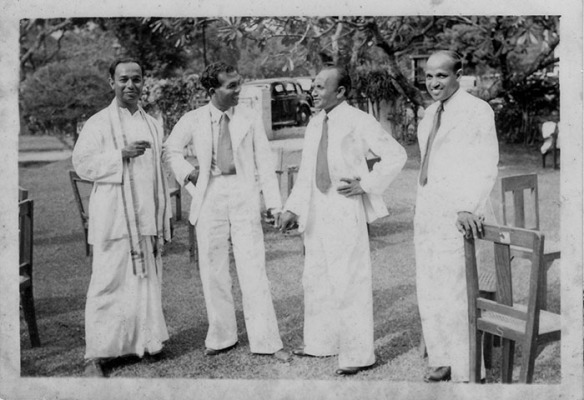 My father Bennie Kirtisinghe at the wedding of his good friend Wimalatissa Indrasoma on the 28 Aug 1952. On the extreme right his good friend Godwin Witane and next to him, Dr. MWV Lakshman de Silva. Girl Guide HQ, Colombo 7, Sri Lanka. Copyright Asoka Indrasoma

Almost a birthday gift, the photo above came quite unexpectedly from a cousin Asoka Indrasoma. My father, with a cigar in hand, in national dress was at the wedding of his good buddy Wimalaya, Wimalatissa Indrasoma, (Asoka’s father) in 1952. A photo like this, unravels a lot of memories. He would have been 34 years old at this time and looks very happy and in good spirits.  The fact that he is the only one in national dress does not seem to bother him. However, his lifelong friend Godwin Witane, on the extreme right has a certain smile on his face and I wonder who the photographer was. My father, Uncle Wimalatissa and Uncle Godwin remained good friends through out their lives. Today, 13 May would have been my father’s 99th birthday. 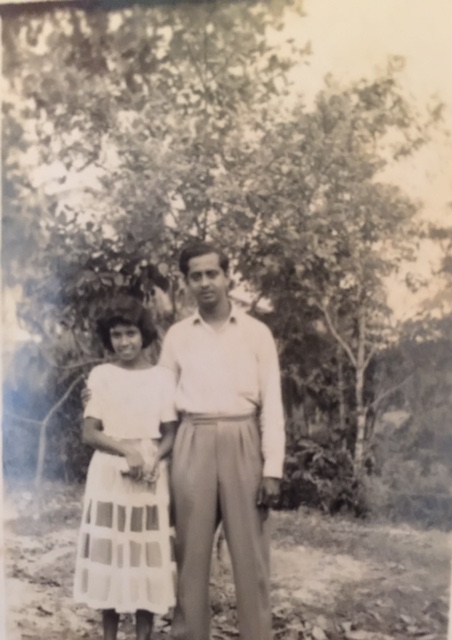 Life is a retrospective, a continuous flow of images and thoughts. Usually, my mind has constant flashbacks of what life was like with my father. I’d often get woken up on holidays at Hikkaduwa, with a banging on the window “rise and shine, get up, get up!” Giving a boost to these episodic memory wanderings, I had the unexpected bonus last month, of hearing his voice and see him come alive in Rupavahini’s teledrama Palingu Menike, as the “Iskoley mahattaya” — school master.

However, it is his words, often humorous, mixture of Sinhala and English for punning and tongue-in-cheek comments in his letters to me, that I see him in my mind’s eye.

My father with my sons in the sea at Hikkaduwa. He taught us and his grandchildren to play “Ring-a-ring-roses” in the water. Photo copyright Chulie de Silva

His letters were gold then and now. Where ever I was —  Liverpool, Penang, KL or Brunei –  life in the Hikkaduwa house would come alive to me. Often his letters would make comments of the tourists staying with them, painting a lively picture of his life, that never failed to bring a smile to my face. In this letter written in January 1993, he would have been 75. “An old friend, a guest from Holland brought me a Gin- Bols, which satisfies me after a bath with tonic and crushed ice.”

In the same letter he talks of two Dutch men. 34 and 44 years old, who are tobacco smokers and roll their own cigarettes.  “I have taken to my old pipe and smoke often after meals,” and says “one of the Dutch men an engineer “marvels” at his building construction and water and sewage systems which are contrary to all norms and accepted laws!” Many a times have we moaned about his disastrous skills in construction – very far removed from his father, my grandfather. “The two [Dutch] men and I argue about philosophy and religion.” The parting comment of one of the Dutch was, “Bennie is a gentleman in disguise,” while the other had concluded that “Bennie is like the old fox who has not lost his tricks, though he has lost his hair.”

Probably perked up by the Dutch comments he says, “I am enjoying good health in fine weather and of course the old man sea is ever so timid.” I have “Kola Kanda” herbal porridge with green vegetables like Gotukola for breakfast.” His special recipe includes Quaker oats and he complains that my Mum doesn’t give him access to the electric blender, but she or my sister-in-law Padmini will grind the veg in the old fashioned way in a pounding stone to make his breakfast. “If I had taken Kola Kanda much earlier, I would have taken another wife. But for the present this one is enough…”

My father Bennie with Malika, his grand niece on one of his visits to our house then 39, Chapel Road, Nugegoda.

Prophetically, he ends the letter I have in my hand saying, “even if I don’t write, you can read my old letters, which you will do even if I am no more. Bye Bye, don’t cry for me.”

Godwin Mama called Bennie, my father “The most popular citizen of Hikkaduwa” in an appreciation written after his death in 2002.

My blog post on “On Chasing Jade Dragons with Mao Tsetung “ was based on a book that was a gift to my parents from Wimalatissa Mama. 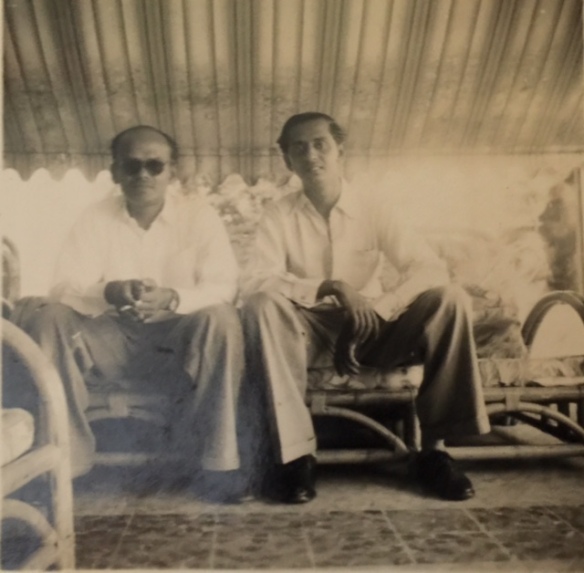 Wimalatissa Indrasoma on the right with an unknown friend. From our family albums.

7 thoughts on “Bennie, the Gentleman in Disguise!”