25 years after the fall of the Berlin wall and over six years since I glimpsed a piece of this history, it was time to dig up my photos. It was on a cold blustery morning in May 2008, that I saw the eight 12-foot-high concrete sections of the wall and the creepy three-story East German guard tower that had once been located near Checkpoint Charlie — Berlin’s best-known East-West crossing. Each section of the wall apparently weighs over 3 tons.

Where was I? No, this was not in Berlin but at the Berlin Wall Gallery at the Newseum in Washington. Newseum, as the name implies is a news museum — all 7 stories of the plush glass and steel  building that took 4 years to build at a cost of 450 Million dollars. It is one of the most expensive museums and  I suppose no expense was spared to get these artifacts too,

“The Berlin Wall was strong enough to stop a tank, but it couldn’t stop news from getting into East Germany by word of mouth, smuggled messages or radio and television,” so the Newseum said. 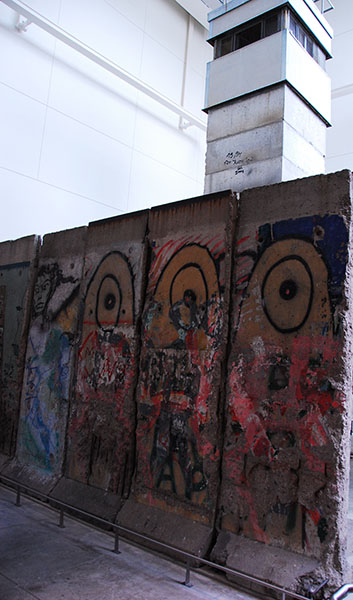 Interestingly, the red blur on the back of this photo below is a reflection of me taking the photo. 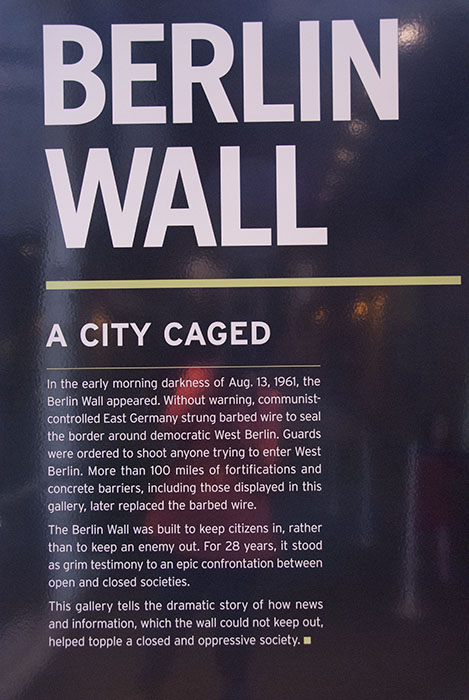 Amidst the Berlin Walls lethal restrains of razor wire, guard dogs was the dreaded three-story towers that housed the armed guards and searchlights. This one stood at Stallschreiberstrasse less than a mile from Checkpoint Charlie.

Originally there were more than 116 towers says Wikipaedia, but today, only a few towers have survived. The Newseum claims that this is the only one in the US. The death tower, as they came to be called  guard was gift in 1994 to the Newseum from the Checkpoint Charlie Museum in Berlin and was facilitated by Rainer Hiderbrandt, the Museum’s director and founder.

The tower is creepy. I stood looking up at it for ages. Photo copyright Chulie de Silva.

and there were celebrations.

So what do we have after 25 years…. Old order did change, but we are still a world in conflict, mired in wars and definitely not at peace. The euphoria  has subsided, Europe is fraying at the edges and icons may have toppled but there are others that have sprung up….  sort of like the venomous creatures on Medusa’s head. One can hardly escape the sobering 24/7 news that hits you from all sides, unless you are a meditating forest monk. Us, the lesser mortals will reflect on what has happened in the last quarter century this Sunday, on the 25th anniversary of the fall of the Berlin Wall.

4 thoughts on “The Berlin Wall & Death Tower, I Saw”