Fleeing from Colombo and rushing off to watch elephants, leopards and generally loll among the peace and quiet of a wildlife sanctuary is one of the most desired getaways in Sri Lanka.  Leopard sightings are rare, and stories abound around the leopards and the lucky ones who managed to photograph them.

When we were young spotting a whale spouting beyond the reef at Hikkaduwa was most we got on whale watching. Half a century later the scenario has changed and we can see these amazing creatures up much closer on whale watching safaris.

Gehan de Silva Wijeyeratne writing for the Wall Street Journal says most emphatically that Sri Lanka is the best all-round wildlife destination and asks the question: “What can I actually see if I am on a two week trip? This is a question I often ask myself when thumbing through a beautiful wildlife book or a tour operator’s brochure to a country. For my book Wild Sri Lanka published by John Beaufoy Publishing, I decided to adapt an article I wrote based on 12 days in the field during an incredible holiday in Sri Lanka in April 2012. 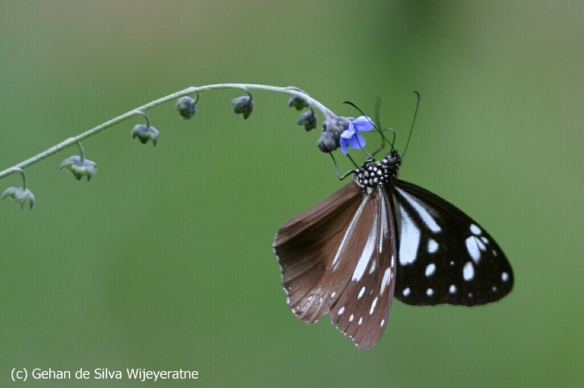 I felt an actual example would be the best way to answer the question that a would be traveller would have. My holiday with family and friends in rotation was planned with garnering more material for the Wild Sri Lanka book. But it was the type of trip anyone can arrange through a tour operator. I cannot think of a better way to say what a truly magical destination Sri Lanka is for wildlife other than to invite the reader to share the adventure I had on a real trip.”

“Daddy, are they watching us?” asks Amali my youngest daughter her voice slightly tense. From the inky black depths of the sea, where there is no light and some predators hunt using sonar, the hunters have gathered behind us. They are spy hopping, lying vertically in the water with their eyes above the surface. They are talking in a language, a coda, a series of clicks. I wish we could talk to them and ask how old they are? I imagine them to be as much as two hundred years old. They may have been around when whalers arrived here and their relatives were slain. In the 21st century they seem to know they are safe. Even safer with me because they have profiled us with their sonar and realised I am with two children. The whalers never had children on their boats. So perhaps these whales sense that we are no risk at all. …