My mother Manel Chitrawathy Kirtisinghe in her mid-twenties. Rephotographed from an original . Photograph© Chulie de Silva

Born on 22 August 1922, my mother Manel Chitrawathy was the eldest daughter of Romiel Anthony Fernando, a dashing handsome man and Eva Engelthina Dissanayake, a quiet daughter of the Dissanayake Walauwa, Panadura,   She as the lotus she was named after was a picture (Chithra) all her life.

Now she is gone from us, it’s hard to put into words her life and our loss. When I saw her on the 21 Dec. 2013, she was getting weaker and more feeble. For a once feisty strong woman, it must have been hard to be dependent.

Amma weak but still insisting she can walk. H er memory was sharp as ever. At Siri Niwas, kotumidula on the 21 Dec. 2013. Photograph© Chulie de Silva

We talked as we always did of old times in this house that she had come as a bride. She recalled again one of her favourite stories of how her mother-in-law, my grandmother had called her the most obedient daughter-in-law. She was undoubtedly my grandmother’s favourite daughter-in-law and had trusted her with her wardrobe (the traditional Birawa Almirah) keys. On the 7th day almsgiving to the Buddhist priests, she had given the keys to my father’s eldest brother Edmund Kirtisinghe’s wife Meta and my grandmother’s sister — Jano Hamy as requested by them.  The two on opening the almirah had discovered the LKR 40,000 that my grand mother had hidden among her linen.  My uncle had chided his wife and aunt and said the money should rightfully go to my mother, who had nursed my grandmother. My mother in turn had not used the money for herself but had built a ward in a hospital at Ambalangoda, my grandmother’s birth town. When relatives and friends wanted her to put her name on a plaque in the hospital, she had refused and said “I didn’t do this “pinkama (a donation)” for publicity.”

Amma in front of the Birawa Almirah, which survived the tsunami of 2004. Elpitiya, 22 April 2007.Photograph© Chulie de Silva

She aged gracefully, and was always tastefully dressed, her long stresses combed into a traditional konde (bun)on the nape of her neck.

Amma probably in her late 50s re -photographed from an original phot. Photograph© Chulie de Silva

Many will remember not only  her beauty but how she kept family relationships going, how she helped the women in Hikkaduwa during difficult periods, what an efficient methodical business woman she was, her generosity etc. I learned recently, how she had written love letters on behalf of our neighbhour Anula’s daughters to their boy friend in Denmark.

For our family, she was the rock, everyone depended on — in times of adversity, as well as joy. There were times she stubbornly did things her own way.  This was apparent till the last days when she refused to sit in the wheelchair my son Ranil gave her or even use a walking stick.

Her cooking was legendary —  the simple “kirihodi”  of coconut milk gravy, made with fresh coconuts from the garden was my favourite. I’d carry back bottles of this yummy gravy, ambul thiyal from tuna fish to Nugegoda to hoard and eat to my hearts content. 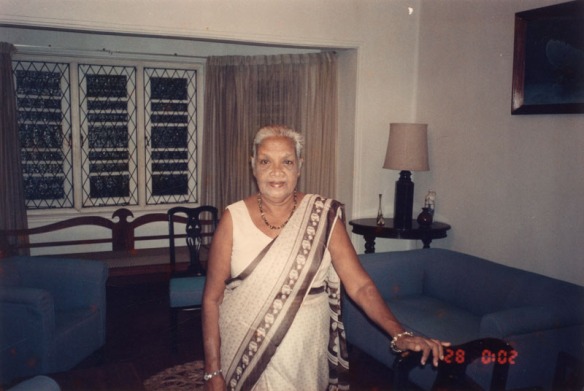 Her 90th birthday was a land mark event as well as her 91st, when friends and relatives gathered and good wishes poured in. She lapped up all the attention with her usual grace.

It’s hard to describe the many facets of her extraordinary personality. Having lost her favourite son Prasanna in the tsunami, I didn’t think she would survive long. She became quieter, but turned to quiet meditations and adjusted to a different life away from the familiarity of the house she loved at Hikkaduwa. During the time when the family first moved to Elpitiya and then to Galle, she had maintained a daily log — sort of a blog.She recorded neatly in note books what the family did and the detail record of the policeman who was stationed at the residence of my brother Pradeep — a district judge then.

She was remarkably liberal in her outlook and adjusted well to many of the changes that life dealt with stoic acceptance. Losing Prasanna was the greatest tragedy in her life. Once when my father complained about topless tourists they had as guests in the house, she quietly said, “Let them be, we will only lose customers.”

She and I had last locked horns when as a child  of 5 or so I had refused to wear a dress with a scratchy organdie collar to a wedding. She had said “no wedding” if I didn’t wear that dress, and I had happily stayed at home. Many years later when my in-laws complained about me she had remarked that she had stopped telling me what to do after this dress episode.! My divorce did pain her, but she  had remarked to a nosey relative “it was her wish to get married, and now its her wish to dissolve that marriage.” She never complained about me taking off to Bangladesh and not being around but was always delighted to see me.  Ever the professional, she would always say “Do your job well and look after your finances.”

She was my most willing model, always ready to face the camera, poised and collected.

But I was struggling to photograph her as I saw her life ebbing away, yet I wanted to capture all the little things I wanted to remember her by. However, uppermost in my mind was the Buddhist doctrine of impermanence and the dreaded day of parting. 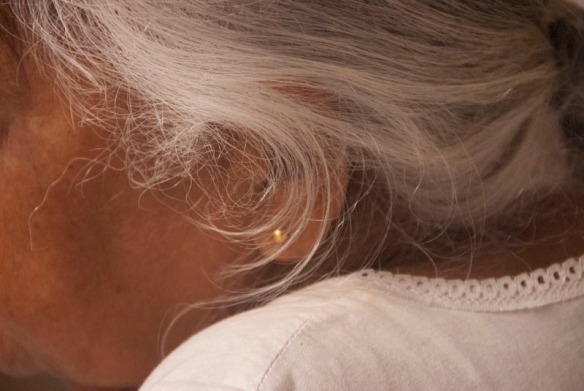 Amma getting quieter by the day and the smile was less forthcoming. Photograph© Chulie de Silva

Even after she returned to Siriniwasa, our house at Hikkaduwa, she refused to go to the back verandah or to walk on the beach. She once peeped out recently but wouldn’t venture out and refused to go out saying “Not today.” Probably the memories of the laughter she shared with Prasanna my brother was too much for her o bear.

On 16 January, I had held her hand in mine. I could see the similarity between our hands. I was her but not her — as she is now, one day, I would be this too. Shakespear’s classic words “Eyes, look your last!, Arms, take your last embrace!,” was ringing in my ears, but yet I was hoping I’d be able to get back on Saturday early morning to hold her hand.  I  stroked her silky silvery hair and gave her my last kiss and cuddle.

But my wish was not to be.  When next I saw her she lay cold. The face was younger, and  she looked very different. Only the hair was still silky to the touch. We brought her home at 3:45 am on the 18th to lie in front of the doorway of love, where she had first met my father.

“Death lies on her, like an untimely frost
Upon the sweetest flower of all the field.” — Shakespeare, Romeo and Juliet. 18 January 2014. Photograph© Chulie de Silva 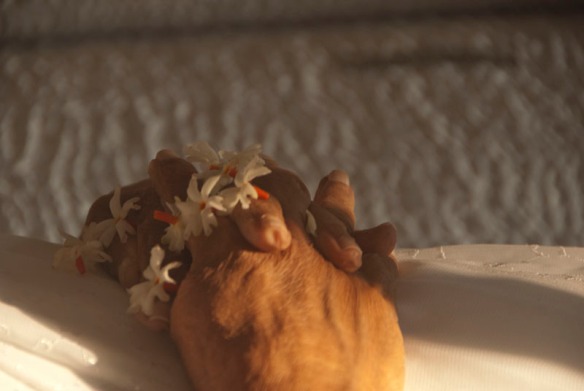 Transient alas! are all component things,
Subject are they to birth, and then decay
Having gained birth to death the life-flux swings
Bliss truly dawns when unrest dies away.

10 thoughts on “A star danced when my Amma was born”