Then there was the soft rain in the morning – falling gently, the morning drink for the parched grass after the blistering sun of yesterday. The planter’s chair  left on the back verandah is wet. Why should I be surprised?– It’s after all the monsoon and I love rain washed mornings. Beyond the fallen browned coconut leaves, beyond the sun hood of the boat bobbing on the gentle waves, the sky is turning blue. 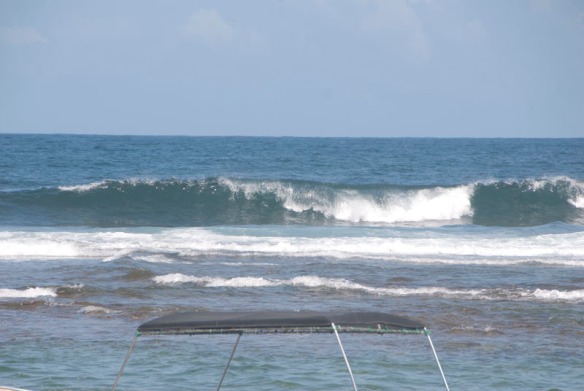 Waves form almost out of nothing, curls beautifully and lovingly break on the reef. I can watch these waves for hours. The beach too is washed, the sand damp and it is yet to be invaded by noisy screaming herds of children, youth peeing on our fence and their barking dogs. Calm before the human storm. Time for an early morning swim.

The avocado my sister-in-law has got for breakfast is unblemished and had cost only 30 LKR compared to the 60 or 70 LKR I pay in Colombo.  The spot rupee had ended at 131.85/132.00 per dollar, on the 19 Aug. — its lowest since Sep. 17, 2012. So in dollar terms the avocado is good value. A bit of it ends up on my face — a cooling mask. Then I hear the drums — the steady beating and the sounds of a trumpet drifts in. In all our lives, there are sounds, words, phrases and images that resonate deeply. I hastily wash the impromptu stuff from my face and not quite knowing what it is but sensing a photo op., run out with the camera. 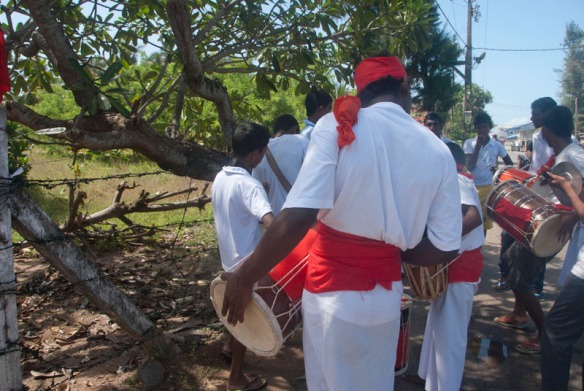 It’s all happening across the road. The new Honda shop is a far cry from the little shop with a metal grid that I had clung to save myself in the tsunami. Certainly, Hikkaduwa has built back better. …

Children get ready with Buddhist flags for the start of a perahera to the temple. Photograph© Chulie de Silva

Girls stand in the hot sun holding colourful Buddhist flags eager to get going. It’s dress time for a little boy, who doesn’t seem too happy with his dress.

A mother wraps her young son in a shimmering red cloth for the perahera. Photograph© Chulie de Silva

What’s it all about, I ask the kids. It’s a “Kiri Amma almsgiving” says one kid. This is usually an offering to Goddess Pattini to invoke her blessings for breast feeding mums, or the weak, sick and infirm. Goddess Pattini is partial to women devotees and has a strong following here. Mostly illnesses like chicken pox, measles and mumps are called “Deiyannge leda”- or gods inflicted diseases.

Boys hold the colourful canopy under which the devotess will walk to the temple at Hikkaduwa. Siriniwasa, our house  is visible across the street. Photograph© Chulie de Silva

The Nikini poya that falls today is also called a “Shudda poya.” This is something new that I had not heard before. Houses are washed, cleaned and a vegetarian meal is served on banana leaves in villages.

The little boy now holds a sheaf of peacock feathers and waits for the procession to start. A part of the newly renovated wall of Siriniwasa is in the background. Photograph© Chulie de Silva. 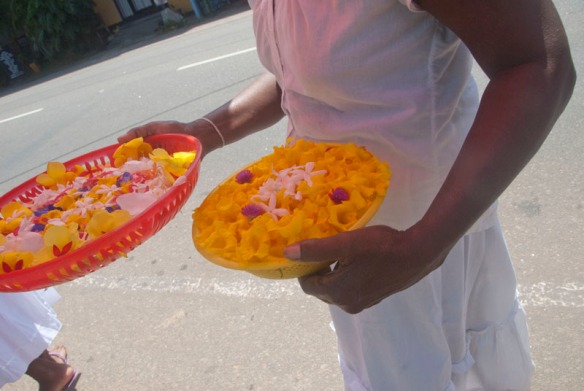 Flower offerings for the temple at Hikkaduwa.Photograph© Chulie de Silva

‘Once in a Blue Moon’ expresses the idea of a rare, special time when magical things can happen. According to astrologers there are conflicting definitions of what makes a Moon blue. Some say it is when we get two full moons in a row, both in the same sign. Other say it doesn’t matter if they are in the same sign as long as they both occur in the same calendar month. And there’s a third definition. Usually, there are three full moons between the date of the solstice and the date of the equinox – if you get a fourth, the third in the sequence is a Blue Moon too. By that definition, this Full Moon is blue!

4 thoughts on “Fleeting Moments at Hikkaduwa”