“If only we could set sail in ships whose cargo is memory….and thereby go out on recollection seas where all reality drifts and fades before great gentle beasts scaled by infinite possibility,” says my blog reader, one time visitor to Lanka and friend Dale Hammond. Words so apt – for the sailing I’ll go. … 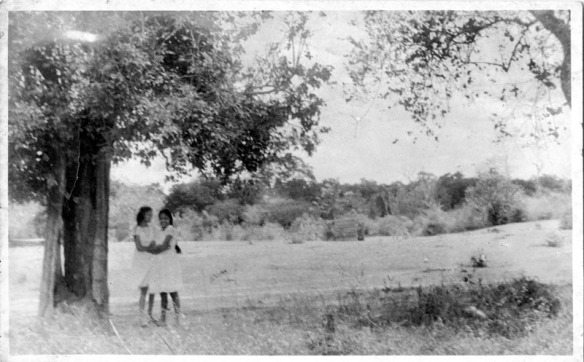 The photo was a scanned copy of a faded one. The figures a tad blurred. My Amma (Mum)  had not even worn her specs or seated herself in front of the computer, when she saw the photo. She peered and said “That’s me isn’t it? and that’s Sita, my cousin from Elivila (Panadura).”

Sita sporting a fashionable short hairdo and Amma with her classic long plait had been in Kataragama. This was before her marriage and she looks a bit coy, so maybe my father took the photo somewhere in the mid 1940’s. The date and time and who took it is not in Amma’s cargo of memories. However, what’s in her cargo is that a coconut fell on Sita’s head and she was ill – “very ill, but they saved her. Seetha was  my Great-grand mother Annie Caroline Disanayake’s brother’s daughter. No one of that family are alive today.

The ship with the cargo of memories was in full sail now “I came to Hikkaduwa as a bride of 21, not yet 22, in 1944 on June 11. The wedding was at Waluwwa,  Panadura on the 8 June. I had passed my Senior Cambridge Exam and was teaching at Sri Sumangala Girl’s school, Panadura.”  She was the Head Girl of the school too, I hear but no mention of it was made. 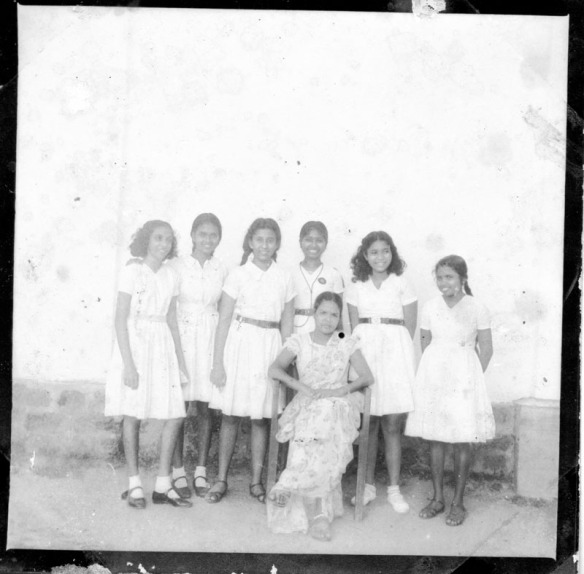 The one who jumps out of the cargo most often is her mother-in-law, the formidable SK Pinto Hamy, who had told her “Your job is to look after the husband and any children you might have. You don’t need to go out to teach.”

While Amma obediently nodded her head, my aunt Leela, her first cousin was angry. “You are a fool, a right royal fool, to let your mother-in-law dictate terms to you.” No one messed around with Aunt Leela. She had a great sense of humour, a deep husky laugh and was a very assertive lady. Great grandma Annie had stepped in to calm Leela  and say “I will look for a man without a mother-in-law for you.”

11 June 1944, there had been a grand evening tea party to welcome my father and his new bride to Siriniwasa Hikkaduwa. On that day, my mother says a telegram ( the closest equivalent to today’s sms) had come for my father Bennie from my Uncle Lionel’s care giver Mr. Susamuththu in Kankesanturai (KKS) Sanatorium ” Lionel mentally deranged, Condition serious, Come immediately.”

Uncle Lionel was Father’s no. 3 brother, his favourite Punchi Aiya. His Punchi Aiya had contacted TB, soon after he got marriage. TB in the late 1930’s was a terminal illness without any known cure. Father who was following a course in civil engineering at the Technical College dropped out to go look after him in KKS. Although brother Richie was a doctor and Bertie was probably at medical college, Pinto Hamy turned to my father and had declared “I need to sacrifice one to save the other.”  Father’s love for his brothers was legendary and I don’t think he needed much convincing by my grandmother. Still  a major decision that changed forever the course of my father’s life.

My Father Bennie, in the first photograph he had given my mother before marriage. Photograph© Chulie de Silva

Now Amma and I were pooling our joint cargo of memories. ….

A separate compartment had been booked to transfer the patient Lionel to KKS, through the Fort Railway Master, who luckily happened to be a relative. At the Fort Railway station, almost at the eleventh hour, Aunt Laura ( Father’s eldest maternal uncle H deS Kularatne’s wife) had asked her Doctor son Damon to go with my father in the train. My father and Uncle Damon, I remember had a very close loving bond — probably as a result of this kind of support.

My father’s eldest brother Edmund (aka Parakrama Kirtisinghe) who was a lecturer in Zoology at the Colombo University. He didn’t think his sick brother would last the journey.  So Edmund followed by car  journeying parallel to the train on the A9. At every level crossing they waited and watched the train they heaved a sigh of relief. The brother was still alive.The plan was that if he died on the train, the body would be transferred to the car at one of these crossings, to be brought to Colombo.

My father had rented a room in a house in KKS and had nursed Uncle Lionel for a couple of years. At times the medicine given for TB brought on hallucinations and controlling him had been difficult. Father was not unscathed. He contacted Malaria while studying in Kandy and this resurfaced in KKS and only got back to Hikkaduwa after Lionel was cured and was recuperating.

Thus the telegram was something that was not expected. It was not shown to Father or Pinto Hamy but Edmund had quietly dispatched No. 5 brother Vinnie to KKS to check on Lionel. Pinto Hamy was vexed. “Where has Vinnie disappeared to on this important evening?” she had kept saying. Lionel had felt insecure when he heard about the marriage and had dictated the telegram to Susumuththu. Lionel only needed the reassurance that he would still be cared for by the family.

Lionel’s Father-in-law Mudaliyar K T A de Silva was too scared to let his daughter Enid near him. So it fell to Amma, to prepare Lionel’s meals when he came back to Hikkaduwa, as well as for his attendant caregiver who needed a different menu.

Apparently Lionel was still poorly and Pinto Hamy in her usual way had said “Enough of Western medicine now let me take over.” She had got her horoscope reader who was adept at getting rid of evil spirits. He had chanted stuff with lime leaves, given him some concoction to drink, and he puked a lot of green stuff and a piece of metal, which they said was an evil charm.

Whatever it was, Lionel recovered ending the TB saga and worked in the Dictionary office translating scientific terms for the newly introduced Sinhala syllabi in schools thanks to his friend SWRD Bandaranaike. He was seen visiting his science colleagues frequently at the Botany Department of the Colombo University. He walked leaning to one side — the side where one lung had collapsed for the TB. Careful and always worried about his health he wore a hat and carried an umbrella too when he stepped out of his chauffeur driven car. This earned him the nickname “Hat & Umbrella Man”. He lived well into his 70s with Enid, the latter years in the Mudaliyar’s house and died peacefully in his sleep.