A couple of my friends have asked me what’s an Oxford Bath after I mentioned it in my blog Benny’s Point. Very simply it is what these boys are doing in Dhaka — bathing in the nude.

I had heard this term when I was a kid in the 1950s when indoor bathrooms with piped in water were not so common. My aunts would go to the front house “Mangala Giri” saying they are going for an Oxford Bath in the closed bathroom.

A year or so ago, my memory was refreshed when I saw it on the heading of an article by Ambassador Jayantha Dhanapala titled “An Oxford bath for Sri Lankan Diplomacy.” In this article he gives probably the origin of the term “Oxford Bath.” “An old joke, shared between Oxford and Cambridge Universities, relates how an elderly Cambridge Professor visited his Professor friend in Oxford. It was a hot summer day and the two men decided to swim in the nude in a secluded spot along the Isis River. Suddenly a bevy of women undergraduates rode past on bicycles. The Cambridge Professor hastily grabbed his towel and wore it round his waist. The Oxford Professor, however, frantically wrapped his towel around his head hiding his face. As the giggling girls retreated the Cambridge Professor asked the Oxford don why he only covered his face. The reply he received was, “Well, in Oxford, some of us are better recognized by our faces”! 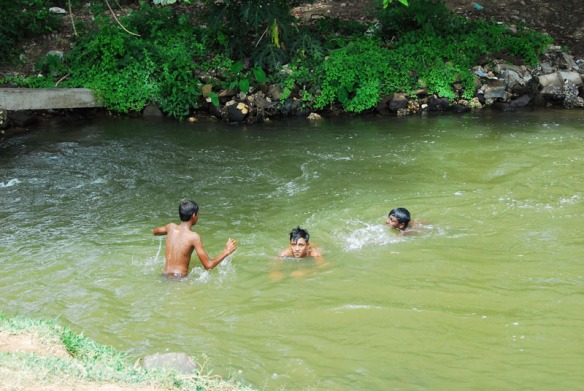 Boys bath in a shallow stream, Kilinochchi. Bathing in the open is always more fun than in a closed bathroom. Photograph© Chulie de Silva

Thus Amb. Dhanapala says throughout the English-speaking world, the “Oxford bath” has come to mean a bath in the nude. But only we oldies remember this term and it is now probably not in use now!. Even when we had bathrooms, a well bath in the sun, the cool refreshing water sans chlorine was my choice.

The well was an important water source and still is for many in Sri Lanka, who do not have piped water. Wells and access to water were also high in the priority for many people resettling after the ending of the war. Seeing this abandoned well in a property next to the hotel we stayed In Jaffna in 2009 was very poignant. I remembered my own childhood and many happy hours at the well, as children and then as teenagers with our neighbhour Dayanathi  and “girlie talks” amidst dousing ourselves with buckets of cold, refreshing water. 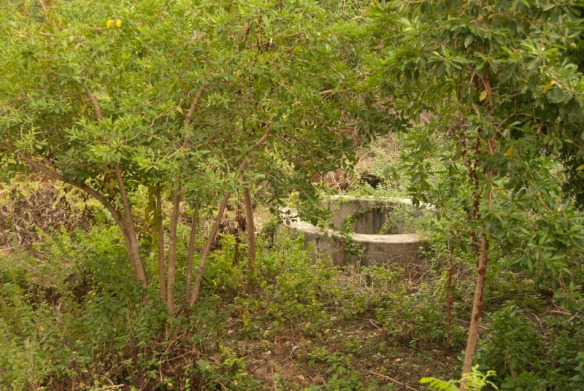 My Great-grandma’s house had an inside bathroom but the domestics had to carry water from the well and fill huge vats inside for anyone who wanted to bathe inside. While we had baths inside when we were very small, as soon as we were old enough we would bath at the well. Even after a sea bath at Hikkaduwa, we’d rush to the well and pour buckets of fresh water to wash the sticky salt out.

In Pandura we were told to bath with only 20 buckets of water -10 first, soap your self and 10 more. Otherwise, we were warned we’ll catch our death with pneumonia. These dire warnings along with the directive was often totally ignored. Ceclin our maid/cook, the majordomo at that time was not averse to keeping an ear cocked while we were at the well. She knew me too well and would yell  from inside the kitchen, “Chulie Baby, are you bathing to soak your bones!” (In Sinhala — Ata pegennakang nanawada?). Many years later when I met her she still called me “baby” and had not lost her sense of humour.

Village life in some parts of Lanka has still not changed. For many, the trek to the river or stream or even a man made water tank is a daily ritual. This often happens mid-day, like the man in the photo above at Mahdangasweva. Or  the bath is at the end of the day, when all work is done.

A woman returns after an evening bath in a stream at Mahavillachiya, Sri Lanka. 22 April 2008. Photograph© Chulie de Silva.

My male friends would schedule trips to villagers around the times these women bathe and referred to these times as GNT — in Sinhalese meaning Ganu ( women) Nana ( bathing) Times.

You may as well ask Why? because the bathing costume was a sarong or a wide piece of cloth, called the “Diya Redda” ( literally the Water/wet Cloth).  This they wore covering the breasts and reaching to knee level. Once wet, the cloth clung to the body — need I say more? 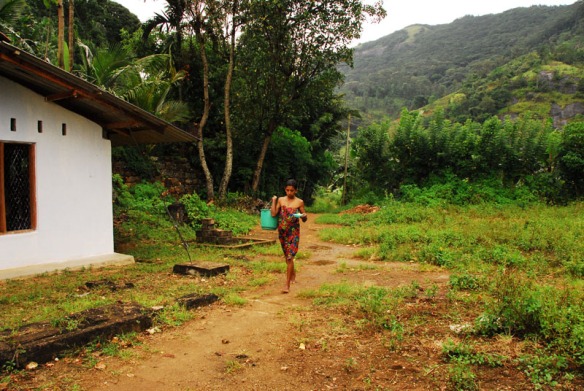