Last night, well past 1 am, while my Nugegoda neighbourhood slept and pole cats frolicked on my rooftop, I sat listening to a lesser known Dvorak piece:  “Zypressen for String Quartet”.  The sender Dale Hammond had said “…helps me to feel words and to see and feel characters in a story…almost like with the music I can reach out and touch them.  So, I searched around a bit and came up with a lesser known Dvorak piece. Click on the time line just before 2:00 minutes.  That helped me to sense and feel the people in the following “Letter to Aruni,” which I love. I begin to see the expression in their faces, the movement of their hands, light and shadow, a breeze thru a cotton shirt or sari.  I got the strongest image at 2:59, but that theme only runs for about: 17 before I lose the image. However, another way I can see is by starting the Dvorak at 00:00, move thru the intro and then begin to read at :13 or :14.” 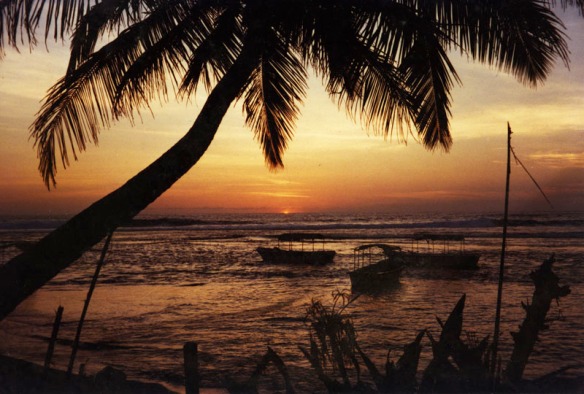 Sunset through the cinnamon stick fence at Siriniwasa, Hikkaduwa. Circa 2002.

“Overall, the sections of the Dvorak above  approximates what I often get in your writing…optimism, youth, light–gentle–sinuous–smooth–curving movement, shyness, necessary and very appropriate formality , sweetness, caring, memory, humor that is always kind….”

What was this letter to Aruni, and who was Dale Hammond? First The letter –purportedly written by my mother Manel in her teens to an agony columnist of the Sunday Observer.

I am the eldest daughter in our family, unblemished as the lotus flower I was named after and was brought up by my maternal grandmother in a Walauwa in Panadura. While on a pilgrimage to the shrine in the jungle, we stopped at a house of a relative of mine in Hikkaduwa. There I met this handsome young man at the doorway to his house and he served us tea. He reappeared as we finished bathing in the river before going to the shrine, and he made us marmite soup with just a touch of lime. On the way back he sat with my brother Sepal in our bus. Now he visits our school on the pretext of visiting his aunt who is the Principal of the school. The problem is that my friends call him “Redda” for wearing national dress and I hear his mother will veto a proposal. What should I do?

Aruni’s reply: “Get him to wear western dress and hope his mother will die soon, you are sure to be a winner.”

The letter and the reply both were humorous concoctions of my father Bennie Kirtisinghe and was embedded in a blog post “Flower of Love: Bennie Meets Manel” by  Bala Malli . 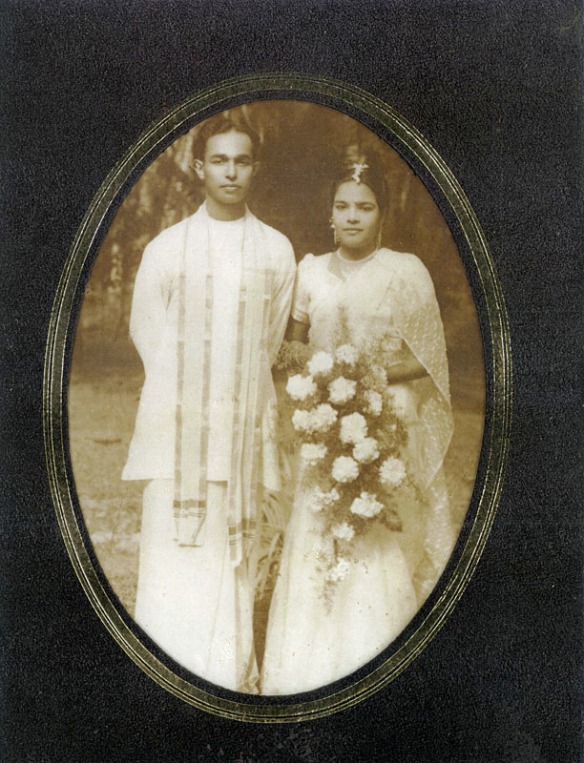 Manel, my Amma, did turn out to be the predicted winner but couldn’t get Thatha to wear western dress on the wedding day.  The wedding took place in the ample and beautiful gardens of the Dissanayake Waluwa in Pandura on June 8th 1944.  Amma was 21 going on 22 and Thatha was 25 at the time of marriage – I guess my grandma didn’t veto the proposal in the end. …

So how did this listening to music and reading blogs come about and who was Dale Hammond?

On 11 May, 2013, I received this comment on my blog Hikkaduwa Chronicles, on the post “Return to Hikkaduwa 7 years after tsunami” and said:

“Was listening to Prokofiev, Opus 31 as I read your “Letters from my father Bennie & Bala Malli.”  It all comes back….It all comes back…  I trust your mother, you, all of yours are well.”
Dale H.

Yes, it all came back for me too. Dale H. was Dale Hammond who first got in touch with me in 2010 to say:

My name is Dale Hammond and I live with my wife Anna in Santa Barbara County, California. I am assuming you are Chulanganie, daugther of Bennie and Manel Kirtisinghe of Hikkaduwa.

Recently I was remembering your parents and came upon your Hikkaduwa Chronicles. I noticed the last comment on the link below was from 2008, so I wanted to make sure you are aware of the comment I left at the bottom of the link. That is why I am writing.
http://chuls.wordpress.com/2008/06/30/the-flower-of-love-bennie-meets-manel/#comment-101
Best Regards,
Dale Hammond
Lompoc, California

The verandah at the back of Siriniwas, facing the sea. Circa 1970’s. Photographer unknown. Photograph© Chulie de Silva

Chulie,
I stayed with the very kind and gentle Bennie and Manel 42 years ago. A few days ago I wrote the following to my wife Anna, who is touring round-the-world….

One night while you were in Singapore I began to dream of my own trip thru that part of the world 42 years ago. Somehow, my mind got to what was then Ceylon and a little west coastal town there named Hikkadua [sic Hikkaduwa]. I had it so good there…so much so that its memory has receded into my mind to a special place that today makes me wonder if I was ever there at all. For a couple of dollars a day I stayed with a very kind man and his wife: a house they called “Siri Niwasa”, a wonderful room that looked on a garden, a short path to the sea with a magical coral reef, 3 meals a day, and a young man who climbed the trees for young coconuts when I was thirsty in the heat of the day. It was a peaceful town, and the only foreigners I saw during my 2 week stay were a couple of young Germans with a quirky way of looking at life.

My host and hostess were Bennie and Manel. After so many years, a few days ago I found them again….http://chuls.wordpress.com/2008/06/30/the-flower-of-love-bennie-meets-manel/
Love,
Dale

Dale’s message arriving so close to my father’s birthday on 13 May, was as I said to him then a “wonderful posthumous gift”.

I updated him on family news and promised to tell my mother, which I did but I forgot to respond to Dale and tell him that my mother remembered him.

So the 2013, comment came again three years later almost to the day again of my father’s Birthday and yet again a delight.  My mind jumped back to the earlier correspondence I responded immediately, again giving him family news and photos. Dale came back with this:

“….and…thank you for your reply. Yes, it has been awhile. Where we left off, I think,  you were on your way to your Mother to ask if she remembered me. When I heard nothing about her response, I did what I tend to do. That is, I assumed she did not remember me in a good light. When I look back at that period of my life, I think of myself as young, brave, and very foolish, with a less than healthy emphasis on the latter quality. Hence, in my logic, I indicted myself in your mother’s eyes. In truth, I hope it would not be so, or, at the very worst, she does not remember me at all.

My parents Bennie & Manel Kirtisinghe on the back garden of Siriniwasa, Hikkaduwa circa late 1970’s. Photographer unknown from the family albums. Photograph© Chulie de Silva

I do remember your mother and father. They were kind and gentle and to me embodied connection and hope, and I know now, for what was then my reality, they were “what the doctor ordered.” They have long been and will always be in my memory.

I thoroughly enjoy your writing and believe there is much in it to savor. You speak of a time and of a place that few of us could otherwise only imagine. But more, I see in your words a story of people who are real, and special, yet possess qualities to which, I think, many are now and will be drawn. Most of all, at least for me, your words transcend more than just years and memory, but also those human differences in which we so often mire ourselves. All of us are after all, so much alike, and I believe few could not look to Bennie and Manel and recognize the best in themselves.

On a related note, we live not far from Santa Barbara, CA. That is where I work. Annually, this city plays host to the Santa Barbara International Film Festival. It grows every year, although still small by relative standards. Happily so, as I have heard many say it is intimate in a way the Academy Awards, held 90 miles to the South, could never achieve. But, its size does not preclude it being a draw for great films and great actors: Helena Bonham Carter, Daniel Day Lewis, Robert Deniro, Jeff Bridges, Martin Scorsese, Jeffrey Rush are just the beginning of the list, year over year.

But, beyond the big names and big films, are the lesser known films and actors and actresses that comprise the independents that grace the stage of the Arlington, the Lobero, and the Riviera, along with other venues. To the point, I believe the story of “Siri Niwasa” is more than worthy of standing with any story contained within those many Independents I have seen at the Festival over the years. It’s a great and wonderful story and I pray it will not end.”