The award ceremony will take place in Barcelona on 7th March, 2013. An exhibition of his work, Joan Fontcuberta – 2013 Hasselblad Award Winner will open on 25th October, 2013 at the Hasselblad Center at the Gothenburg Museum of Art, Sweden. That day, The Hasselblad Foundation will host a symposium with the award winner, and a book on the work of Joan Fontcuberta, published by Mack, will be launched.

The Foundation’s citation regarding the decision to award the 2013 prize to Joan Fontcuberta reads as follows:

Joan Fontcuberta is one of the most inventive contemporary photographers, with an over 30-year achievement of constantly investigating and questioning the photographic medium. His work is distinguished by original and playful conceptual approaches that particularly explore photographic conventions, means of representation and claims to truth. He challenges concepts of science and fiction in interdisciplinary projects that extend far beyond the gallery space. In addition to his photographic practice, Joan Fontcuberta’s capacities as a writer, teacher and curator have been greatly inspirational to the younger generation.

Joan Fontcuberta is an artist who works between ‘reality’ and ‘fiction’, by manufacturing photographic illusions loosely based on ‘the real’. He creates a visual universe in which concepts of truth and fiction are intertwined. This dialogue, however, is never brought to a concrete conclusion but remains elusive. In many ways Joan Fontcuberta’s work both anticipates and integrates the radical impact of digital manipulation in the field of current photographic practice.

Since the mid-1980 s he has used photography to reflect doubts and distrust of the authorities as well as of the veracity of photography itself and the multitude of media that it relates to. What makes Joan Fontcuberta’s work so engaging is the biting humour, sharp wit and seamless technique with which he infuses all of his elaborate provocations.

Joan Fontcuberta’s work undermines mass media in all of its guises, scientific investiga- tions, technological breakthroughs, the art world, religion, medicine and of course, political and governmental propaganda. He mixes all the forms of media and public communication. In essence, he creates bodies of work that resemble a modern-day Trojan horse, and then presents it in scholarly journals, hardbound‚ scientific books, large scale museums exhibitions, and as newsworthy discoveries that dupe even the most professional experts and journalists as well as their readers.

With irony as an important artistic strategy Joan Fontucuberta continues to amaze, confound and amuse or provoke the viewer with an ever-evolving array of techniques and approaches. His topics as and his focus on recent technologies and his constant changes of method characterize him as an exceptional photographer and artist.

This year’s award committee, which submitted its proposal to the Foundation’s board of directors, consisted of: 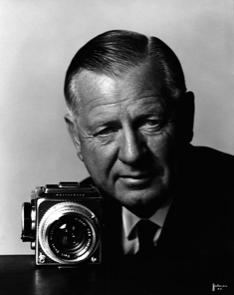 The Erna and Victor Hasselblad Foundation was established in 1979 in accordance with the last will and testament of Erna and Victor Hasselblad. The main aim of the Foundation is to promote research and academic teaching in the natural sciences and photography. This aim is achieved through the awarding of donations and grants for scientific research, an international award in photography, and scholarships and grants for research projects in photography.