The tableau of 16 male and female figures standing rigidly holding in their hands what looks like bodies at first glance is both striking and impressive.  Its almost as they are before a tribunal and are on the verge of moving forward.  They are naked as if they have lost all they have, the pain of their souls visible in the taut faces, mouths are open but they are voiceless. 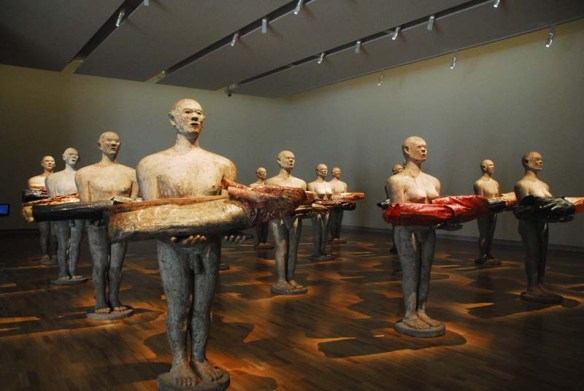 I walk through the grid ever so carefully and take a closer look to see what they are holding in their hands. They are hardened shells of clothing – the bodies are no more, only the empty cocoons that once held warm bodies remain. One figure holds an Indonesian Baju Kurong that I used to love to wear when I lived in Malaysia. Resting on it is a child’s minature “baju” (garment).  Its rigor mortis sans bodies.

I am tempted to take a furtive look back to see if the ghosts of the past are watching me. The silence is not an easy silence – muffled and muted yet thousand shrieking voices of pain wafts around the bodies. This confronting moving installation is by Dadang Christanto, an Indonesian artist now settled in Australia and is dedicated to all the victims and survivors of the brutal military regime in Indonesia of 1966–98.

Foraging in the exhibition notes I glean more. —   Christiano was born in Tegal Indonesia in 1957 of Chinese descent. His artistic oeuvre includes painting, drawing, performance, sculpture and installations. He was influenced in making They give evidence by a childhood traumatic experience of the disappearance of his father. Soldiers had come to his house in the night, when he was eight, and taken his father away. He has not seen his father since.  Born out of this pain he carries great sympathy for the many who have suffered racial discrimination and systematic violence.  “The figures are not only a representation of the ‘earth’, but also of ‘victims holding victims’; those who have disappeared and those who are left behind to grieve.”

The educational notes say that during this troubled period in Indonesia many ethnic Chinese were targeted as they were “seen” to be Communists. The estimation was that between 100,000 to 2 million were killed in Indonesia during this period.

The original work was funded through a grant from the Japanese government and was shown at the Museum of Contemporary Art, Tokyo, in 1997 and then in Hiroshima. It consisted of 20 figures four of which were purchased by the museum in Tokyo.

The work then appeared at the 24th Sao Paolo Biennale 1998, where only six figures were shown due to the cost of shipping. In Japan, many of the audience left flowers or offerings at the feet of the figures, which Christianto saw as an act of contrition for the occupation of Indonesia during World War II.

His work was shown in his own country in July 2002 in an outdoor public space in the town of Palmerah, near Jakarta and was titled “Unspeakable Horror.” The figures were covered in black cloth and red ribbon as the people objected to the nudity. However, the work was soon removed as religious leaders objected to their presence.

This installation was purchased by the  the NSW Art Gallery in 2003 and consists of 16 standing figures made from terracotta powder mixed with fibreglass resin, each holding pieces of clothing which are shaped into empty figures. Christanto has noted that the clothes his figures hold are not the figures’ own but represent those left by the body and soul of those who once wore them.

They give Evidence” transcends both time and place. The installation flashes across my eyes as I watch news and as I see the continuing violence and injustices everywhere. I can’t help but think if we had one figure for every country that has experienced such traumatic events how big an installation we will need.

Christanto  also says he tried to create in his figures a sense of the serenity and spirituality of the Buddha himself.  As Buddha said “All conditioned things are painful—when with wisdom this one realizes, then one is repelled by the misery: This is the path to purity.”

1 thought on “They Give Evidence”