“That was fun, wasn’t it” Photograph© Chulie de Silva

These were special children from a UNICEF-supported ‘Protection of Children at Risk’ (PCAR) project. The children from Dhaka and Barisal are now under the care of two NGOs – Aparajeyo-Bangladesh and Padakhep Manabik Unnayan Kendra. 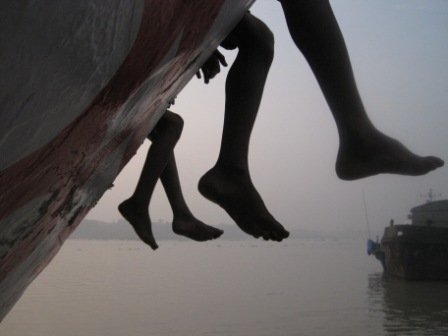 Launch will come soon and we have to get onboard. If I am given something to carry, I will have enough to buy breakfast. Barisal Launch Terminal, Barisal, Bangladesh, 2010. Photo: Md. Mohasin Hossain, 12

They grew up in poverty-stricken destitute families where survival was an ordeal.  Every day was a challenge, another lurking threat, in a hostile environment where they were beaten and ill treated by step parents, aunts, uncles, and employers. Facing great adversity, they took stock of their suffering and thought that they could do better on their own living in the streets. They slept on piers, carried heavy luggage to collect some money for food.  “I slept, ate and lived in the streets,” says thirteen year old Md. Foysal.

The cameras and the photography training gave them an opportunity to explore their more sensitive side.  Tell their stories with their photos, under the expert guidance of two equally sensitive tutors, Habibul Haque and Tanzim Wahib of Drik. The children blossomed as they learned to write with light (‘photography’, etymology of, from photos  light, and graphos writing).  Their joy at holding a camera and learning to use it is palpable. They bravely opted to go back to the streets/slums where they lived and they wrote their stories looking for beauty and truth, Many focused poignantly on other children trapped in poverty as they were. 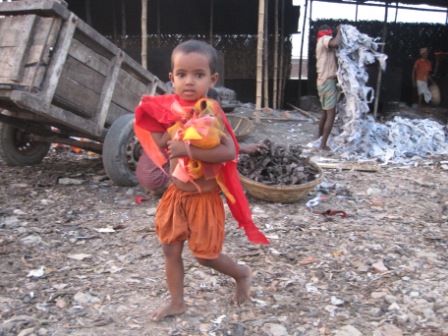 Seven-year old Ayesha has no idea whether she lives is a good or a bad environment. She is in a place where leather is tanned. Fish and chicken meal is a byproduct of this process but the tanning pollutes the environment. Hazaribag Tannery, Dhaka, Bangladesh. 2010, Photo: Shahin Alam, 15

Translating into English with my colleagues at Drik their short narrative biographies, I could see that the sorrows in their short lives were plentiful. “Did we suffer because we were poor?” asks another thirteen year old Labony.

My mind races back to our magical childhood growing up by the sea at Hikkaduwa or with my grandparents and aunts and uncles in Panadura where love and care were bountiful.  My father was not rich by monetary terms but he was rich in loving. We were never slapped or caned and I specially rejoiced at his ruling on no Sunday school  — much to the dismay of the strongly Buddhist clan in Panadura – five days of school was enough and Saturday and Sunday were days for play. The only warning I used to get was that he would cut off my pony tail if I was naughty, and that was enough for me to toe the line.

That love and a happy childhood has sustained me through many difficult times in adult life and I wondered how these scars of childhood would affect the lives of these children.   I saw in their writings a deep sadness at the way life has treated them but also great fortitude and many wanted to put the bad times behind and move on. When troubles come they face it them with courage almost as if they out-stared it so that “Trouble” begins to regret that it ever bothered them and goes off to find itself a more acquiescent target. The children luckily found their way into the “Drop in Centres” run by the two NGOs.

Many of the labourers in our country do not stop their work when they get tired. They are allowed to relax only after finishing their work. I took this image of a tired worker taking a short break on the way back home from Sadarghat. Photo: Md. Foysal, 13

Yesterday evening at the launching of the “Living in the Urban Jungle” exhibition and the book launch at the Grand Ball Room of the posh Sonargaon Hotel, they  entered the world of the rich they had glimpsed from the other side of the street.  Yesterday, they were the shining stars, praised and honored.  They proudly pointed out their work and were disappointed when I couldn’t speak to them in Bangla.

I wish I could have told them of Sri Lanka’s National Child Protection Authority and how the lives of many have improved but that work is ongoing and for us too in Lanka there is much to do still to improve the lives of poor children. But instead I told them that their photos were infinitely better than any of mine. Labony’s face lit up and she said “Thank you” in English. Pretty as a picture, I wondered how anyone could beat her so much for her to run away and question why Allah sent her to this world.

Just now the world is theirs, the applause is theirs. Photograph©Chulie de Silva

“I want to be a photo journalist,” “I want to teach photography to other street children,” “ I want to have a beauty studio and a photography studio,” they said in a short video shown at the launching ceremony. Just now the world is theirs, the applause is theirs.  They were being interviewed, photographed. The cameras have opened the doors to a new world for them. They are like “Cinderellas” on a spree. Their appetite for photography whetted, they are rearing to do more photography.  They are all dressed up but the ball will end soon once the exhibitions (gallery and mobile in both Dhaka and Barisal) ends. Can the fairy godmothers still hover around them and smooth their path to more learning to prepare them to be the photojournalists they want to be ?  Will their wish come true that many others they know are in similar circumstances can also be helped? 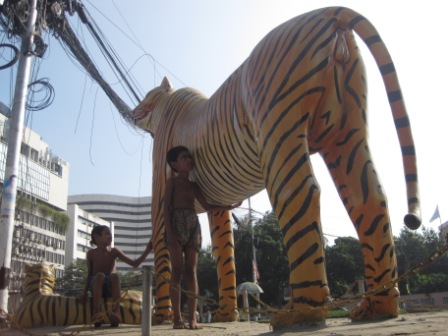 I sell newspapers here. These children and I play with this clay tiger and dream about the real ferocious ones and our future. Photo: Md. Roni, 14

See also: From the other side of the fence by Shahidul Alam who asks “Empowerment can only be explored where equality has previously been denied. How then does one approach exploitation? How does one undo wrongs when one is on the ‘wrong’ side of the fence?”

5 thoughts on “Dhaka Diary: Living in the Urban Jungle and Writing with Light”