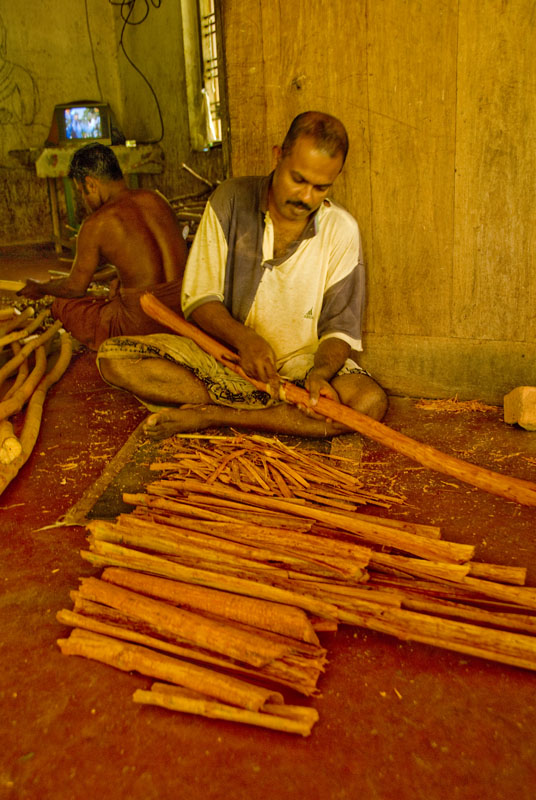 “If I were a cinnamon peeler

I would ride your bed

and leave the yellow bark dust 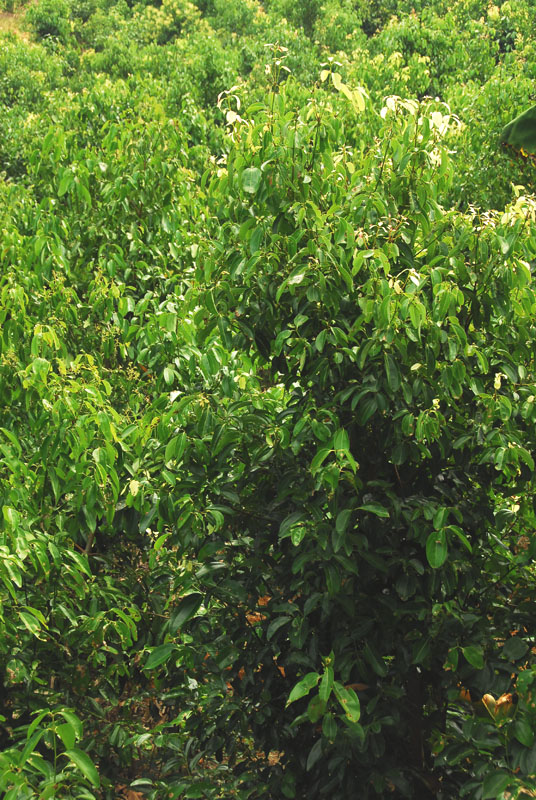 The poem romanticized the profession of cinnamon peeling taking the reader on a very sensuous lover’s romp.  … a man marking his territory and branding his lover with the dust and smell of cinnamon.

We grew up  quite unaware that Cinnamon and its aromatic smell aroused that much passion. The Roman Emperor Nero as a sign of remorse ordered a year’s supply of cinnamon be burnt after he murdered his wife!

There are some claims made that it was the search for cinnamon that motivated adventurers Christopher Columbus and Vasco de Gama to put their ships to sea. Come to think of it,  was cinnamon single handedly instrumental in changing the history of Sri Lanka? The Portuguese established a hold over the king  of Kotte through a trade agreement  in the 16th century when the King of Kotte agreed to supply 2,50,000 lbs of cinnamon to the Portuguese who in return promised to safeguard the Kingdom of Kotte from invaders . 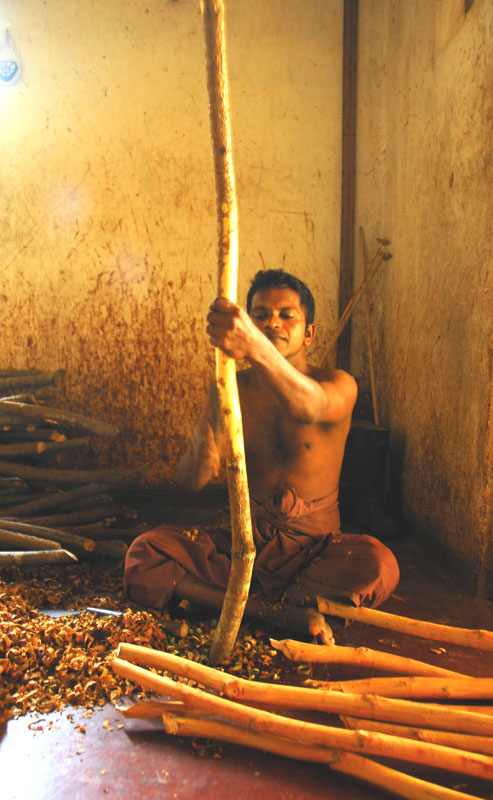 The wood left after the peeling was used for cooking in our house at Hikkaduwa on a special stove that my father had built.  It was a brick fireplace with an opening on the left to push the wood in. The top of the cooker had round metal rings embedded in clay bricks to hold the pots. The hottest plate was one on the side where the wood went in and burned at its peak.  The rings further away were used for pots that would be simmering.  The aroma of cinnamon would waft mixed with the rich smells of tumeric, chillie, coriander, fresh pepper, lemon grass and the other spices as curries were cooked on clay chatties. We would get the cook lady to pour cold water on  a hot burning piece of cinnamon coal on the hearth, hear the fizz as the flame went out and use it to brush our teeth squeaky clean.  A very organic no cost tothpaste. Our house had a couple of rooms that stored these huge bundles of cinnamon, till the price was right for sale.

Your breasts and shoulders would reek
you could never walk through markets
without the profession of my fingers
floating over you. The blind would
stumble certain of whom they approached
though you might bathe
under rain gutters, monsoon.
Here on the upper thigh
at this smooth pasture
neighbor to your hair
or the crease
that cuts your back. This ankle.
You will be known among strangers
as the cinnamon peeler’s wife.
Ah!  the passion but what’s  the reality? 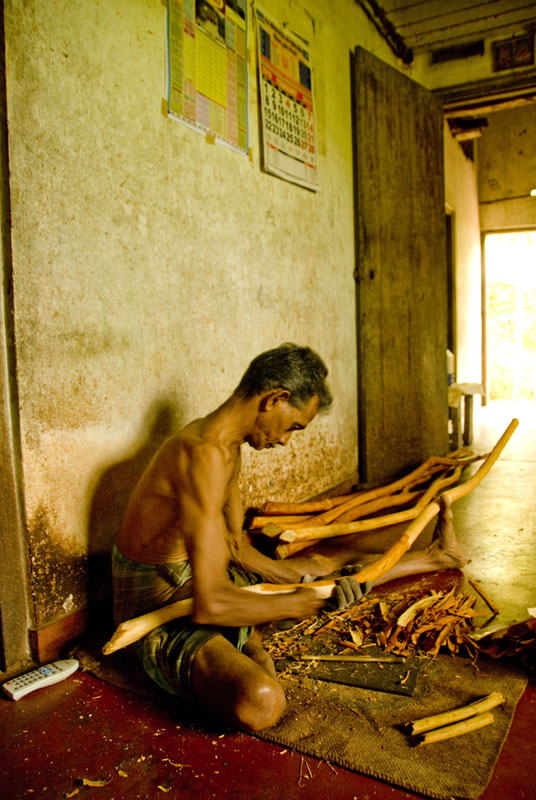 Jayasiri, has been a cinnamon peeler all his life. Photograph©Chulie de Silva

The three men I saw working hard at creating the famous cinnamon quills only gave a curt nod and barely lifted their eyes off the work they were doing when I turned up at the vadiya.” They had no idea who Ondaatje was. Above their heads were a canopy of drying quills. A small TV squeaked with blurry images on a corner table.  If they had lovers that bathed with them in the river, they stayed mum. They  were not bathed in cinnamon dust but the walls were stained.

The first man scraped the outer bark.  The other two loosened the bark and peeled. The peels are dried and telescoped one into another to form quills. The quills are filled with trimming of the bark, which is dried and rolled again tighter and left to dry for a few more  days in the shade. 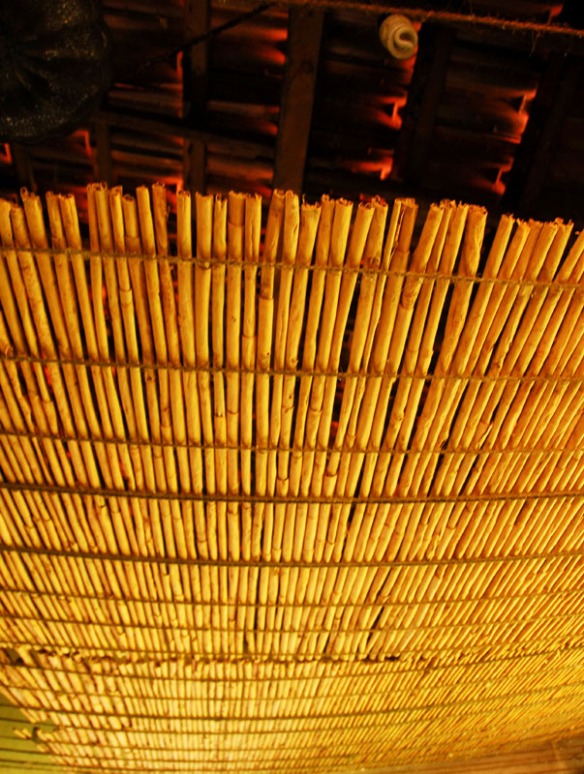 Lately Cinnamon and the need to brand it has been much in the news. The Government has moved to streamline production and the establishment of more modern factories, and to provide support to the smallholders.

But the reality for many  is that cinnamon peeling is hard work . Most work from morning till dusk to earn at the higher end about LKR 15,000 (approx. US$ 150) a month.  An article in the World Socialist website highlights the plight of the 350,000 Sri Lankan families dependent on cinnamon for their living.

Mulling over the plethora of information on cinnamon on the Internet, yet not being able to find the current price cinnamon in International trade, I rang up the Export Development Board.  I was shunted through various people and finally to the librarian. She unfortunately couldn’t give me the figure over the phone but promised to send me the data.  Looks like it’s a a long time coming—and while I wait I’ve added a drop of Cinnamon oil into  the lamp I light in the evening, sit back and let the fragrance waft over as I listen to Ondaatje himself reciting his poem .  … The reality is a far cry from the passion, but then this is poetic voyeurism  at its best. Listen to Michael Ondaatje reading The Cinnamon Peeler   Hamilton Tolles Lecture, April 2009.

In the Budget Speech of 2005, the then Minister of Finance & Planning, Dr. Sarath Amunugama, M.P, said  “Sri Lanka produces more than 90 percent genuine cinnamon (Cinnamomum Zeylanicum Blume) in the world. Our exports account for 63 percent of all spice exports in the world. There is an urgent need for increased investment in research and product development for value addition in cinnamon. Efforts to give eylon Cinnamon maximum protection under WTO agreement are being intensified. Investments in marketing Ceylon Cinnamon is essential to combat this competition. I propose to impose a cess of Rs.2.50/kg. or 0.5% of the value which ever is higher for the development of this industry. The Government will contribute Rs.10 million to set up a Cinnamon Development Fund. ”

This is a publicly disclosed document available for public access but  all images and text in this site is copyright protected. No material from this blog may be used except as a direct reference to this site or unless written permission is granted by the author. Write to chuls201@gmail.com

16 thoughts on “Quills, Passion and the Romance of Cinnamon”