Unawatuna is a respite from the over crowded hippy beaches at Hikkaduwa.  a ten minute drive from Galle, we opted to stay at Unawatuna during a  a family reunion  — a sort of R&R.  We missed Hikkaduwa, but  away from the noisy crowded Hikkaduwa beaches, Unawatuna was balm to that loss. Hard to say that not a dog was around early morning at Unawatuna! 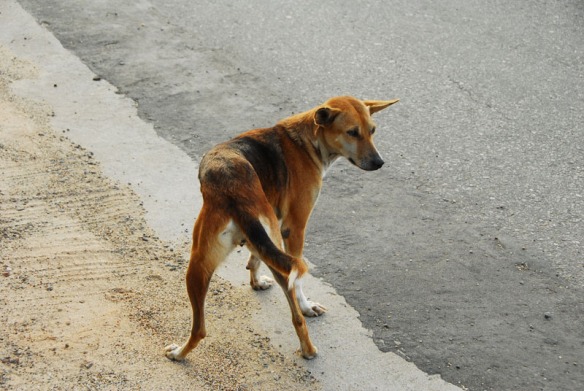 Early morning out for his run, this Unawatuna resident surveys the traffic with canine instinct before crossing. Photograph© Chulie de Silva

The town was waking up. If residents wanted free water and sand to brush your teeth, it was all there! This was and is still a common habit among older coastal residents. 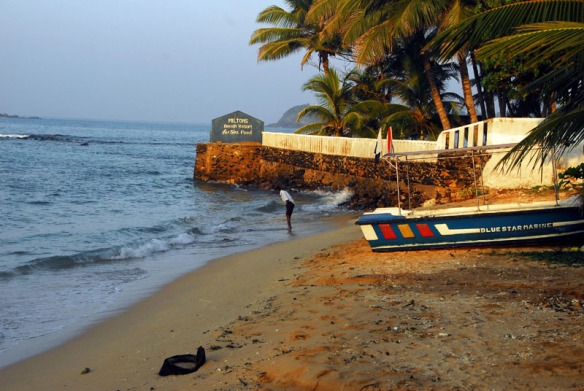 A man brushes his teeth with sea sand and has an early morning wash in the sea at Unawatuna, Sri Lanka. Photograph© Chulie de Silva

Amidst the fast speeding cars and motorbikes, the human powered labour incentive transport modes do exist in Lanka. 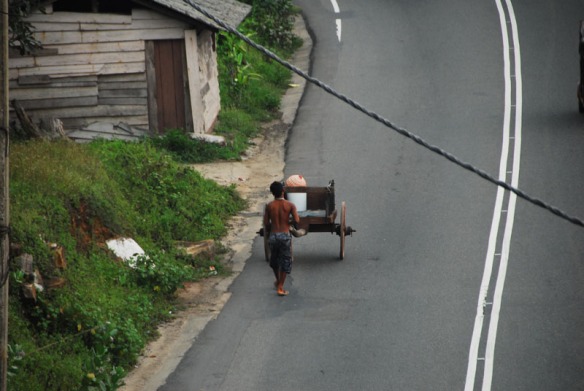 A hand cart trundles along on the winding road below our hotel at Unawatuna, Sri Lanka. Photograph© Chulie de Silva

But still the ubiquitous glass bottom boats popular with tourists for viewing coral was there.

A glass bottom boat silently bobs in the sea across the road from the to the hotel. Unawatuna, Sri Lanka.Photograph© Chulie de Silva

Unawatuna has an interesting past. Some trace the roots of the village to the great epic Ramayana. This is the spot where monkey-warrior Hanuman accidently dropped a part of the Himalayas he was carrying. You may ask how on earth did that happen?  Well, Hanuman asked to fetch  medicinal  herbs to heal Lakshman from the Himalaya’s failed to identify these herbs.  So  he took off with the entire mountain and carried it to the battlefield to try to save Lakshman, but in the process, a chunk of it “fell-down” in the location of the present day Unawatuna. Thus the name of the village derives from “Una-watuna” meaning “fell down”.

Derrick Schokman  writing int the Sunday Observer says “Yes indeed, something did fall there in prehistoric times, not on the land but 100 km away from Unawatuna in the sea. It has caused a huge deep pit into which the whole island of Sri Lanka seems ready to slide.”

“Sir Arthur Clarke in one of his books has stated that whatever fell is still there disturbing the gravitational field of the earth. It is labelled Terran Gravitic Anomaly I, 110 metres below the zero reference on the Goddard Space Flight Centre’s 3 D map of the Earth’s Gravimetric Geoid.”

Unawatuna was also the suburb where the Dutch commanders and merchants resided and had their “Buiten Plaatsen — Country residences.  So between Hanuman and the Dutch, there are some more interesting places to explore on the next visit.

Sri Lanka is beautiful, no doubt and historically interesting but it’s the people that make the difference. I stopped to chat to Indrani on her way to work at another hotel.

Indrani works at a tourist hotel and as her smile says she likes it. Unawatune, Sri Lanka. 4 Feb. 2010.Photograph© Chulie de Silva

And at the end of the day, there are the famous sundowners, watching the fiery ball dip into the sea. 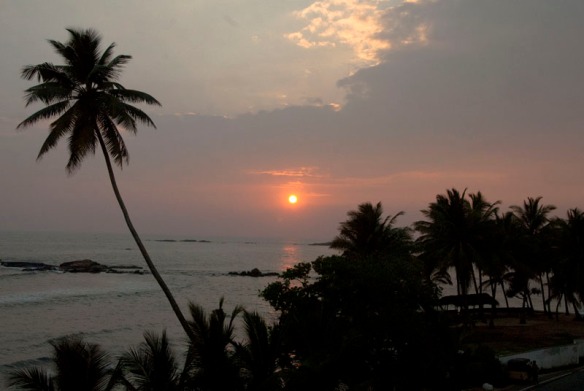 Spectacular sunsets are a common all along the coastal towns in Sri Lanka. Unawatuna, Sri Lanka.Photograph© Chulie de Silva

12 thoughts on “Unawatuna – the chunk that fell”