Temples bathed in the early morning soft sunlight shrouds a spiritual aura that is difficult to describe in words. The aura sort of envelopes you filling you with a refreshing  peaceful calm. The air was cold and sharp and made  my fingers go numb.  But the slowly rising  sun was warming us as it rose in front of this triple roofed  Gokarneshwar (Lord of Gokarna) temple built in 1582 on the banks of the Holy Bagmati river.

On the way, my Indian friends had wanted to know if I wanted milk for the puja. Not knowing exactly what it was I had said yes. I was more interested in photographing but it was a case of first things first. So we took off shoes and climbed a few steps with my friends for the puja. The inner sanctum enshrined a particularly revered Shiva lingam. The milk packets were opened and poured over the lingam by the priest. No photographs there,  so after a quick recital of the Buddhist verses I knew I came out.

Monkeys walked among the statues brazenly picking up offerings to eat and soothsayers, and horoscope readers were seated in the periphery of the temple. Prayers were said, offerings made and the sound of bells being rung tingled through the cold misty air.

The temple bells  were everywhere, from the huge one at the entrance to little ones near statues.  I too followed my friends and rang the big bell as we went in.  You need to do it to mark your presence,  I was told. There are steep steps that lead on to what is possibly a little arm of the Bagmati river where the worshippers  cleansed themselves.  The river considered holy in the Kathmandu valley is supposed to flow from the mouth of a tiger known as Baagdwar. 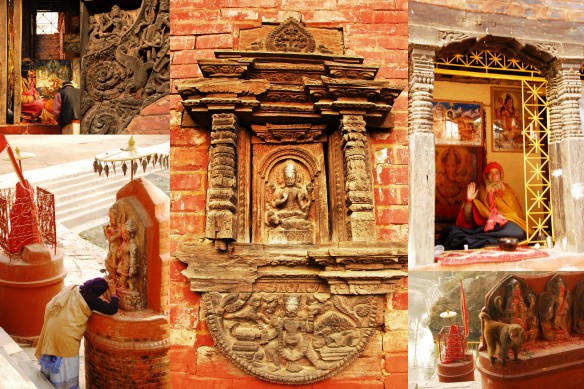 The temple is famous for its collection of sculptures and reliefs that are all around the site. Some date back more than a thousand years.   I am told that the sculptures illustrate an A to Z of Hindu mythology, including early Vedic gods such as Aditya (Sun God), Chandra (Moon God), Indra (on an elephant) and Ganga (with four arms and a pot on her head from which pours the Ganges). Shiva appears in several forms, including as Kamadeva, the God of Love. Apparently, Lord Shiva came to live and hide in the Gokarna Forest disguised as a deer – albeit a deer with a golden horn.  I suppose gods also need a break from the usual work. I wished I too could have absconded from work and stayed a lot longer at the temple.