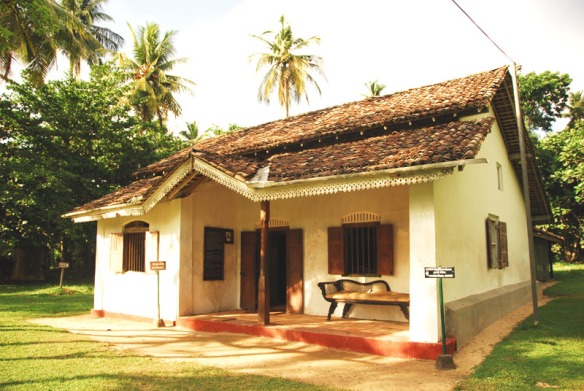 I have a weakness for quaint quintessential Sri Lankan houses like this one as they  bring back a flood of memories of sweet grandma’s, grand aunts, uncles and the happy carefree days of childhood steeped in love and affection.

The open verandah was a must and was the meeting place at sundown, whether it was at Siriniwasa our house on the Hikkaduwa beach;  my great grand mother’s house in Panadura, or at my much admired spinster aunt Punchi Nanda’s also in Hikkaduwa.  The latter was the diminutive scholar aunt who was at one time the Principal of the Polgolla Teacher Training Institute.  She, the learned lady, lived in a similar house to Martin Wickramasinghe surrounded by books.   Her brother Jin Bappa would come some days and ask my parents whether they could “borrow” me for a day. I’d  go willingly holding his hand skipping along the railway line and be “returned”  back in the evening.  All I wanted then was a life like her’s, independence like her’s, a house like her’s filled with books. Sadly that house and the aunt in Hikkaduwa are no more. … but our Siriniwasa destroyed by the tsunami of 2004 has been repaired.

Now to stop my meandering and return to this house in Koggala, Sri Lanka   –  this house managed to survive not only because it was the birthplace of the iconic much loved Sinhala writer  Martin Wickramsinghe (29 May 1890- 23 July 1976) but  also because a female British air force officer fell in love with it and didn’t want it demolished to make way for the Koggala airstrip during the Second World War.  Having saved it from being demolished along with some thousand village houses, we are told the lady officer did actually live in that house. This house was restored by the government for Martin Wickramasinghe in 1962 and after his death, the Wickramasinghe trust runs it as a museum.

Traditional wooden window with bars and fretwork above it. The window is in the bedroom where Martin Wickramasinghe was born at his house, Koggala, Sri Lanka. 5 January 2008. Photograph©Chulie de Silva

The house is over 200 years old .  The time when it was built in Koggala only houses with sturdy lime plastered walls were those of the temple, the village headman, teacher and  the physician. As requested we take off our shoes and walk barefoot over the cool, clay tiles, ever so gently.  No photographs are allowed inside. Compared to houses now this house seems tiny. There is a staircase leading to a loft  like upper floor but we are not allowed to go there.

Showing the room where the writer was born the aged guide tells us that Wickramasinghe was born after many girls and the midwife announced the birth by saying it’s a Sarong (long  tube like cloth sometimes called a lungi, worn wrapped around the waist by men) as opposed to a Kambhaya ( long cloth also worn in the same fashion as a sarong by women, but with only a single seam).

Behind the house there is a collection of his works and writings — family photographs, and a collection as expected of many interesting memorabilia.

Walking towards the museum you meet  the “Sekkuwa” —  a granite grinding stone well used for extracting coconut oil from dried coconut. 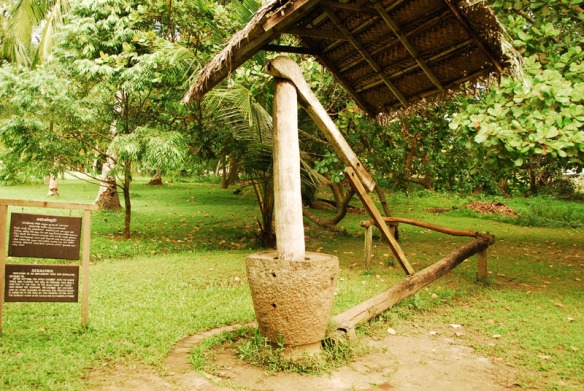 Dried coconut is placed in the stone well,  and two bulls tied to yolk on the pole walk around the sekkuwa.  As the coconut is crushed the oil starts to separate. Sometimes a couple of guys sit on the pole to add extra weight. The refuse from this process is called “poonac” and becomes a part of the feed for the bulls.

The museum also holds a magnificent collection of old fishing boats.  At Hikkaduwa we used to watch these boats push out at sundown and watch them till they were reduced to a single flickering  lamp. In the mornings they would be back, barring disastrous storms, often with huge swordfish strapped to the side.  My cousin Dhyan Kirtisinghe as a budding scientist would be there during holidays collecting parasites from gills for experiments. We couldn’t understand any of the science but watched fascinated crouching on the sand as the parasites were collected. 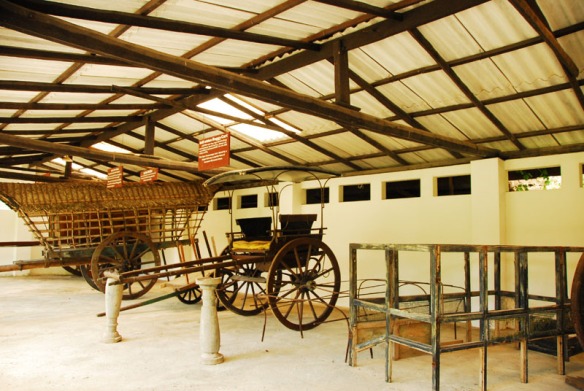 Bullock carts at the Martin Wickramasinghe Museum in Koggala, Sri Lanka. The smaller black elegant hackery was the sportier version and was used by families to travel about and the bigger one with the thatched coconut leaf roof for transporting goods. The latter carts are still used in Sri Lanka for transporting goods in villages. Hackery rides are a feature of many tourist hotels. Photograph©Chulie de Silva

Out there in the museum is also a collection of carts.  The bigger coconut leaf thatched carts are  the heavy load carts — the bara karththey’s– which were the “containers” of olden days.  The carters (drivers) would compose verse and sing to keep the sleep away as they toiled with their carts  specially if they were on their way to the hill country.  These carts are still in use, transporting coconuts, cinnamon leaves and sticks, firewood etc. Even today, we can see an occasional one in the cities.

The smaller one is the more elegant one that families travelled in and we had one for going to school.  These small ones were called “Thrikkaleys.”  Once out of the vicinity of the house we’d beg the carter fondly called “Seeya” (Grandpa) to allow us to sit in front and hold the reins. The fact that Seeya was slightly grimy, smelt of the shot of toddy he had early morning, didn’t deter us one bit from the thrill of racing with another cart. 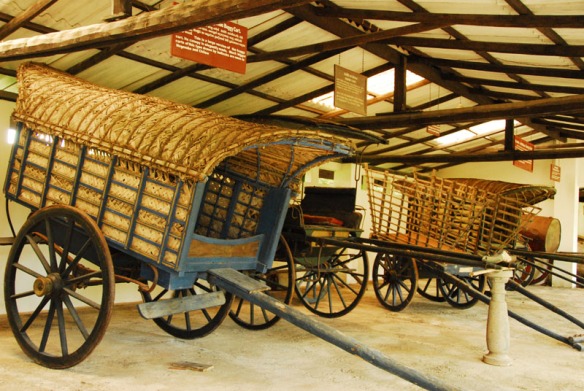 More of the heavy duty Bullock carts with one hackery at the Martin Wickramasinghe Museum in Koggala, Sri Lanka. 5 Jan.2008. Photograph©Chulie de Silva

There are more in this collection of folk culture, artifacts–far too many to mention here.  Building this collection was something close to Martin Wickremasinghe’s heart they say.  The renowned scholar who left school at 16,  says ” his body grew like any Sinhala villager. My mind however developed differently.  the benefit of a private education from a centre of learning or from learned pundits was not available to me. I resorted to learning by directly exploring my world and reading books.”

Three cheers to that mind for developing differently.  Some in the South attribute it to a healthy diet of Bala Malu ( tuna fish) and red raw country rice. Whatever the reason he was an outlier, the “sarong” that came after the “kambhayas.”  He quietly, gently, rose to fame  through his writings and independent thinking. The legacy he left behind is immense. We can read and read again the classics, wrap ourselves in the trials and tribulations, triumphs and joys of village life. Then again, we can walk through this land so gentle and quiet, sit and ponder, watch the water birds and remind ourselves of a writer long gone but whose presence is very much there in that Koggala birthplace.

All images and text in this site is copyrighted. No material from this blog may be used without permission except as a direct reference to this site.