I met Shanika and her father Priyantha from Pereliya, when I went searching for Shainika at the request of Shahidul Alam who had first photographed her soon after the tsunami and written about her in a story titled the Human Spirit.

Shanika who was 8 years old in 2004, survived as she was with an aunt but among the siblings lost was her twin sister.  My only clues were that she was from Pereliya and her father was Priyantha.  Armed with the photograph that Shahidul had taken I had gone around Hikkaduwa but no one recognised her. After many unsuccessful attempts, one day I spotted a little road side cafe called “Shanika” in Peraliya and stopped to inquire as to the owner. It was  a chance well taken.  The cafe was started by Shanika’s father Priyantha.

Priyantha has a new house and received a boat but it has no engine and he laments that he has no fishing nets.  He goes fishing  now in a boat owned by another man but his income now is not what  it was.  Shanika continues to live with her aunt, but there is a deep sadness in her beautiful eyes and she remains thin and fragile.

For many the Billion dollar question is what really happened to the massive amounts pledged. 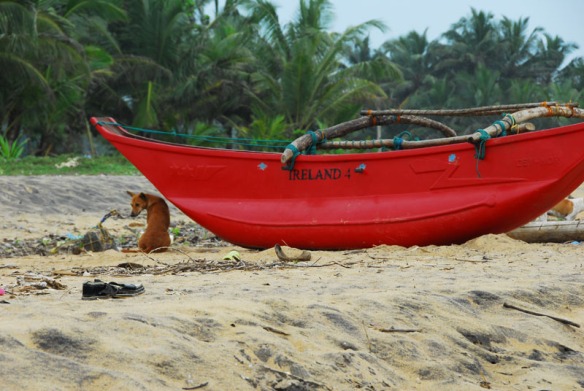 A new catamaran fishing boat on the beach at Kalutara — from an Irish benefactor? 13 Dec.2006. Photograph©Chulie de Silva

As the third year anniversary of the tsunami draws near, the focus has naturally turned to assessments of the massive post-tsunami reconstruction effort.  Most programs are now winding down.  But there is a general sense of apathy and disillusionment among the aid beneficiaries along the southern coast, reports  IRIN news.

Many organisations will now release reports on their reconstruction efforts. UNICEF has released its 2007 Tsunami report highlighting progress made for children since the 2004 catastrophe.

There are many who built back better and moved from wooden houses to brick houses — like this couple in Ambalangoda.

However, there are some beneficiaries apparently who are just receiving relief and are disappointed that it has taken so long – a case of too little too late.  Some are frustrated as promised jobs have not materialized.  The tourist hotels are rebuilt but there are no tourists. Many feel that those who benefited from the tsunami aid most were not the tsunami victims.

2 thoughts on “A Look Back@Tsunami”