The silvery metallic flags – eight in all inside the Supreme Courts ceremonial hall depicts ancient Sinhala flags  and emblems but they stay as rigid and straight-laced as the Supreme Court itself.  The flags don’t flutter.

The room was octagonal, with ten white columns with a decorative carving in gold and has at its midst the government emblem in gold providing a solemn back drop to the red seats for the 3 judge bench.  The flags which reflected the magenta on the  wall gave  a curious silvery dull  glow to them. Quite impressive, if I ignores the monstrous yellow  chandelier hanging in the center.

The opportunity to venture into the corridors of power came yesterday when Kanishka, my nephew and Supun his good friend were taking oaths after completing their degrees in law and the attorney’s exams. The smiles were wide, the joy of success palpable.

The young men in austere in black western style suits,  young ladies glamorous in white sarees and traditional Asian garb., were getting their photos taken.

Padmini my stoic sister-in-law looked happier that I had seen her  for a long, long time and even my 85 year old mum who finds it difficult to travel now, was there for the event, with two of our favourite aunts.

The steps up to the entrance were hard for my mum. Not that we had a wheelchair but I did wonder whether this building had access to the disabled since that provision is now a law in this country. Once inside lifts was there to transport us to the 5thfloor where a milling crowd of lawyers and relatives were gathered.  I had a hurried few minutes to scramble and take a few photographs before we were told to put the cameras away as the judges were approaching.  Each new lawyer, came up to a dais and took their oaths in Sinhala and English but no one did in Tamil.

Most names in the Sinhala tradition, gave a long clan name like – Mudiyanse arachchilage and easily three other names… the “ge” being the connection showing belonging to a family clan, followed by a couple of first names and then again surname in the western tradition. My father Benny once told me why our family decided to drop the “ge” bit . ” When you go up to receive your degree, it should be as you the person, there is no need for this generation to be encumbered with long “ge” names, Kirtisinghe, is sufficient as the family name.”

Supun who with Kanishka had carried my mum to safety during the tsunami came over to greet my mother with the traditional worship bending at her feet. 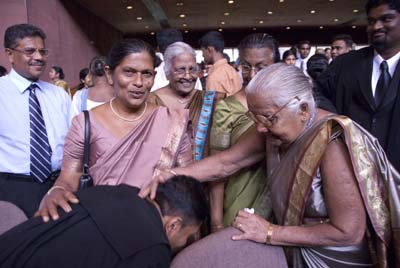 After the tsunami, the sadness we felt overwhelmed us.  It seemed as our sorrow would last for forever. However, deep inside all of us, we had a need to grieve for Prasanna while recognizing the necessity  make it not a bottomless pit of despair.  I still worry about my mother for Prasanna was her favourite son. But My mum and dad were the ones who took Kanishka to school when both parents were working and there has always been a special bond between the Achchi and this  grandson too.  So, today for her there was much joy in seeing Kanishka become an attorney-at-law.

Kanishka, an excellent swimmer had despaired as he sat with me that unforgettable day when we stood guard over Prasanna’s lifeless body — “Thatha was so happy and proud when I got into the varsity.  I saved two lives from drowning but couldn’t save my father.” His triumph today is a tribute to Prasanna and  specially to Padmini, who faced the unexpected tragedy with much admired bravery and quiet dignity.

2 thoughts on “Inside the Supreme Court’s Ceremonial Hall”